It's a Grab Bag of Stuff 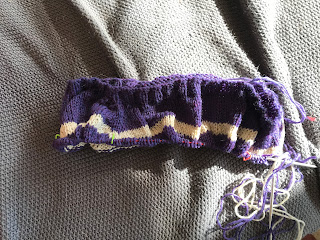 How are you this Thursday? I spent much of yesterday working on cards, and now my neck is kind of sore (I stand at a high counter). There was a lot of to-ing and fro-ing during my craftiness yesterday so sitting wasn't really an option.
I have created so many bits and pieces of card stuff I really need to focus on finishing the cards--so I can create more bits and pieces of stuff. Such is the crafting life.
New mindless knitting It's a sweater called Robin. I had the yarn in the stash. This is basically stockinette in the round with a little stripe every 18 rows. Obviously it is still early days.  I like how this one starts with the ribbed collar but I think in the end that way lies madness.  We'll see.

Beach
We took a walk on the beach last evening. It was a windy day but we had lots of pelican sitings. You can see their very pelican-like beaks in this photo.


Pickleball!
We bought equipment for pickleball! Our front driveway here is just a…
4 comments
Read more 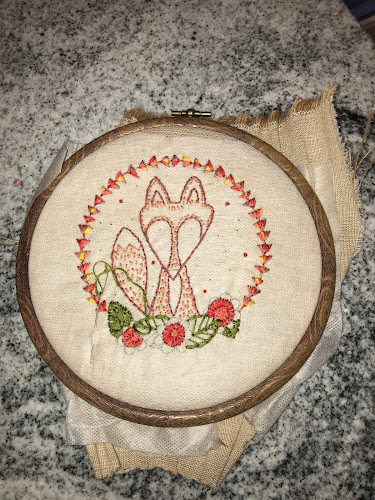 It's Tiny Needle Tuesday! Lookee, I've done this two weeks in a row!
This is (I think) a freebee from Cozy Blue. I only have one real 'fall' oriented piece for the triptych, so I wanted to do another one. This one went really quickly--I've used leftover bits of floss to do three colors on the 'border' and then various other colors (also leftover) for the fox and the flowers at the base.


I spent some time yesterday designing these new cards.  They seem very peaceful to me!


I'm reading "Saint X" which so far is very good.
Other than that, there's a lot of stress surrounding opening schools in the fall and the new ICE ruling (which prohibits international students from being in the US if they are taking all online classes).  Just when you think things can't get worse, they do.
I hope your TNT is peaceful!
4 comments
Read more 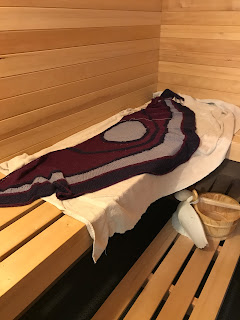 We love the Fifth of July! It means that the horrible horrible fireworks are almost over!
I don't hate fireworks--I really don't. We have a great view of all the people setting them off on the beach (which is illegal, as were the fireworks themselves, but whatever). Apparently the Native American casinos are allowed to sell fireworks that are illegal by state law. Who knew? There seems to be quite the pent up desire for fireworks this year.
What I don't like are: -people who set them off at 2am and/or 5am (both happened here) -people who set them off across the street from us, about 50 feet lower than us, and set off illegal fireworks that basically explode outside your window. The windows shook.  -fireworks ash on the driveway
Pilot spent most of the past two nights in the car in the garage (his 'happy' place during fireworks) and Comet stayed with us but needed to be sitting and sleeping as close to us as she could.
But now they'll be over, expect for random ones f…
7 comments
Read more

All Kinds of Stuff 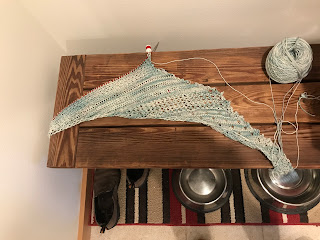 Well, in retrospect, it isn't all kinds of stuff. It is a little bit of knitting and a lot of alpacas. Here we go!
First off: The Asbury Park Shawl. It is a free pattern on Ravelry, has a couple different stitches, and has BEADS! I was jonesing for some beaded knitting. Here we are so far.

Second off: Alpacas! Here is big brother Calypso!  He was sheared about two months ago and his fleece is coming back in.

This is Chaco, who is Calypso and Mana's nephew. His mama is Georgia (Tink's first cria).

This is Tondero. He expects apples. I failed.

And here is little Mana.

It's hard to photograph her face, but it is cute.
She does pose though.

Oh one more thing. I took our 16 year old cat to the vet on Monday, and the news is that she has thyroid disease--I guess it is pretty common among older kitties. So she'll be starting thyroid medicine next week. She has had trouble keeping weight on so this should help. Keep your fingers cross…
6 comments
Read more 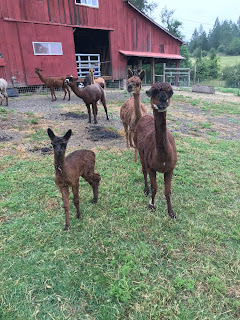 I loved spending time with Mana on Monday and Tuesday. She's so different than Calypso--much more independent and feisty. Of course, I had the opportunity to visit Calypso every day for his first six weeks, and I haven't been able to do that with Mana. But I think she's just a bit of a Diva and a little more headstrong.
It's hard to take good photos of her but let's try.
Here she is with her Mama Tinkerbell and sister Georgia close behind.


She's looking at Pangur the cat.

TNT and a FO 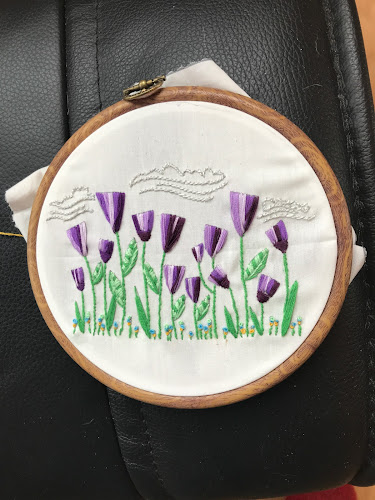 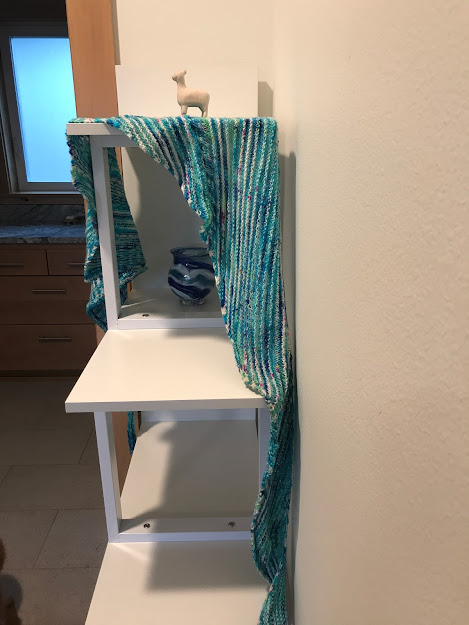 I still need to weave in ends (if I have a tombstone, this will be on my tombstone). I photographed this on the new shelves inour bedroom


I like it.
I have cast on for a new project. It's the Asbury Park shawl and it has BEADS! It's early days so more on this soon. There is also a wrap with two colors. So far I like this pattern a lot--more engaging and lots of changes.
I'm also playing yarn chicken with the moon shawl. I"m on the dark purple color and  there are now about 450 stitches on the needle and I have 12 rows to go and I'm not sure there will be enough yarn there. I'm heading to Eugene tomorrow and will dig around to see if I can find one more skein of this purple color so I'm not freaking out.
Hopefully it will be ok.
Yesterday I mowed the lawn and read and knit. Our soon-to-be new neighbors Jackson and CJ came by for social distance cocktail hour--they're building a house a few houses down from us. Today the weather is foggy and damp, typical b…
6 comments
Read more
More posts