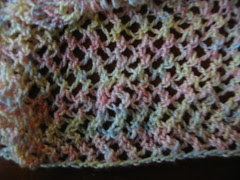 Originally uploaded by kbshee.
Here's a close up look at the shawl...this hank is predominantly pink and the second one I have is predominantly blue, andi think they'll together make a great looking summer shawl.

Anyway...what else have I been doing? Well, I've read two biographies/autobiographies...sometimes I need a little pop cult fix in my life. The first book was 'Front Row'. about Anna Wintour, the editor of Vogue. The book was OK, sort of repititious: she's British, she had a bad relationship with her family, and thus she is a b*tch. Repeat each chapter. It would have made an interesting article in, say, Vanity Fair but a bit much for a book. The second book was by the actor Gene Wilder, called "Kiss Me Like a Stranger". I was looking forward to this book since Willie Wonka is my favorite film charachter of all time. The book had about 2 pages on the film. And about 2 pages on every film he was in. Too much on his relationships and not enough on his films and approach to art. I guess I should stick to reading knitting books for a while.
on May 28, 2005