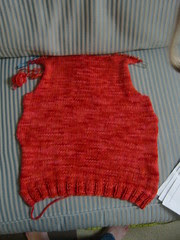 back
Originally uploaded by kbshee.
I have three fairly new projects in the works, and they're all sort of 'longer' projects as opposed to the aran squares and fished I've been working on. I have some beautiful yarns from Mario at handpainted yarn dot com in my stash--and figured I had enough for the Boogie Vest from knitty. I had five skeins and figure it would take four. Well, it looks like it will take two--so I might pick up stitches and knit arms and make it a sweater. But then I might not...we'll see. 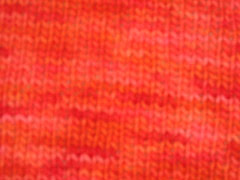 chrysanthemum
Originally uploaded by kbshee.
The color of the yarn is called chrysanthemum, and is a mix of reds, oranges and pinks...it is really pretty. It might be toooo much, though, as a sweater (considering I"m generally a black sweater gal) but we'll see. This yarn is oh so soft. I might make it a short sleeve sweater--it might be great like that on its own. 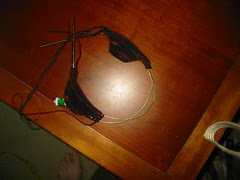 two toes
Originally uploaded by kbshee.
I started another pair of socks...going for two toe ups at one time. I tried the instructions on knitpicks for about two hours...but it just didn't take. So I started these socks one at a time with the figure eight method. Then I've been knitting them in the round two at a time. The yarn is awesome...mountain colors bearfoot...and I have lots of this yarn so after I make a pair for Tim I'll make a pair for me.

I've also started the Midwest Moonlight scarf from Scarf Style in Blue Faced Leicester from Fleece Artist which I love. as soon as it reaches a critical mass I'll post a picture of that too.

And just an aside: you know you're old when the only person you recognize on the 'Celebrity' ad for the Red Cross is Don Johnson. And you think he looks bad. Who are the rest of those people?
on September 12, 2005