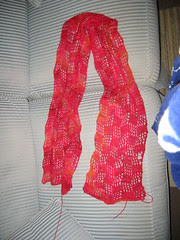 midwest sunrise
Originally uploaded by kbshee.
I love blocking. Let me tell you why.

I really got tired of this scarf. While it has been called an easy knit by some people, I didn't find it that way...it took more concentration than an 'easy knit' but enough repitition that the concentration became boring, if that makes any sense. A lot of counting. And markers wouldn't have helped.

So, even though you are supposed to do 25 repeats of the 18-row pattern, I stopped at 18. The scarf was barely 5 feet long before blocking, which is pretty short for a scarf.

Except. For the magic of blocking. I added 2 feet (@ FEET ) to the length of the scarf through blocking with my steam iron. And the pattern came out. And it looks quite good. And it weighs almost nothing.

I have enough yarn to try to make a pair of matching gloves...we'll see. 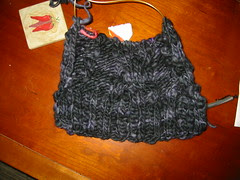 IMG_3188
Originally uploaded by kbshee.
Here's the first eight or so inches of the first sleeve for my blackberry. The yarn is thick and patterned so it is hard to see the cable or the bobbles, but believe me, they're there!
on October 15, 2005

I love that scarf!!! I haven't blocked anything yet, but this is sure inspiration to try it. I'll have to go back and read about the pattern and yarn you used--I'm just catching up on your blog after several weeks playing carpenter.