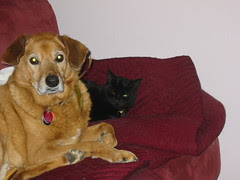 friends
Originally uploaded by kbshee.
I took Stella into the vet today...she needed a rabies shot and I wanted to chat with the vet about her seizures (she's had a few in the past weeks). We decided to try her on some anti-seizure meds (probably phenobarbitol). The biggest concern is that she'll injure (is that spelled right?) herself when she's having a seizure...biting her tail or something like that.

She had a miserable time at the vet, letting out the most miserable howl while they were giving her a shot. My poor kitty. 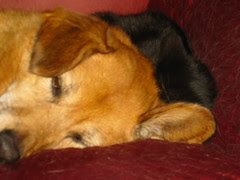 aww
Originally uploaded by kbshee.
She absolutely adores Cody. Here they are snuggled up together (I think Cody could take or leave her presence, but as long as he gets some room on the sofa then he'll tolerate her). At one point during this snuggle she had her front leg resting on his neck.

I know this is a little hallmark-y, and I rarely venture into such mushiness, but you have to admit it is pretty cute.
on December 08, 2005

Poor Stella! No one likes to go to the vet...