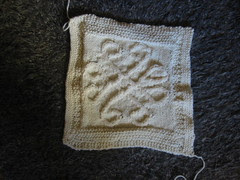 another square
Originally uploaded by kbshee.
I took a break for fall term from working on the Aran Afghan...I had finished all the 'easy' squares and the remaining squares require a bit of attention. So now that I have a few weeks off I thought I'd try to get a number of squares done. Here is number 12, which is sort of a celtic cross pattern. It will look better blocked, I think. 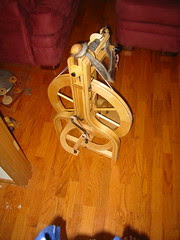 new wheel
Originally uploaded by kbshee.
My new wheel arrived Friday night and it took Tim about ten minutes to set it up. It spins amazingly. I thnk its name is Maya, which is the first name which popped into my head as it came out of the box.

My Kiwi had scotch tension, and this has both, but I've been using the double drive and am getting used to it. I plan to spin the rest of the yarn for a sweater for Tim on it first, plus I have to spin some for the KR spinning exchange. 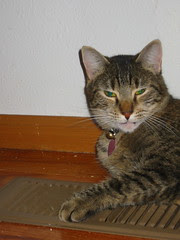 jessie
Originally uploaded by kbshee.
It has been a cold December here in Oregon...we usually have relatively mild winters, but we've had frost every day this week which is unusual. Tim and I can't seem to warm up. Jessie found the best way.
on December 11, 2005

I set up my knitting chair right in front of the radiator in the bedroom. I love the new wheel, I haven't been bitten by the spinning bug but I fear it's going to get me.