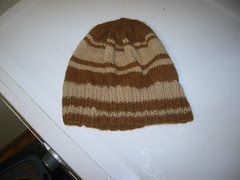 Tim's hat
Originally uploaded by kbshee.
Happy Solstice! I've felt solstice coming on this whole week as the days have started to get dark sooo early, almost around 2:30 or so...but now the days will start to be brighter, and that makes me happy.

I haven't posted any knitting pics for a while so I'll catch up now. First up, Tim's alpaca hat, that I knit while curled up on the sofa with food poisoning. It looks like it needs a weeee bit more blocking on that right side, eh? But. He likes it. The stripes look cool. It should be toasty warm. The wool was that alpaca wool that's the house alpaca at Elann . Very slickery, the alpaca. But it's for my honey so it's worth it.

I've tried to do some spinning with alpaca and woah, it's hard. But I'll persevere. 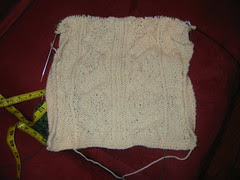 square 12
Originally uploaded by kbshee.
It is taking a bit of time to finish this afghan square, I think I have about ten rows of the pattern then 6 edging rows to go to finish this. Lots of cables on this puppy. I like it...it makes for pretty concentrated knitting but that's OK. I hope to finish two more squares during the holiday, but we'll see. 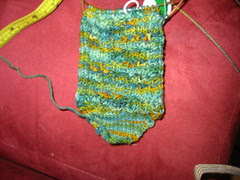 robinsock
Originally uploaded by kbshee.
The Flickr police are going to come and arrest me today for taking a picture of this sock on our burgundy sofa. Whatever. This is the Koigu yarn I received in the KR Sock Round Robin from lovely Lella that I'm creating into my own designed sock. I've never knit with Koigu before, and it is a bit different than other sock yarn and oddly empowering (it has so much strength!). Anyway, instead of a 2x2 rib, I'm doing a 1/1 LC for the knit part of the rib. Trust me, it looks cool.
on December 21, 2005