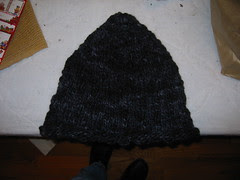 hat b4
Originally uploaded by kbshee.
I love felting.

OK. I mostly love felting. I've made some great felted bags. I've done a very very clever Christmas gift for Tim that I can't post here. But I've never had success with hats.

One of the cool things about felting is that you have to give up basically all control over the finished project. So I've had a few hats just get too small to be of any use. And I did a beret that just sort of sits at an odd angle on your head. Fine. I learned.

So when I started this hat (made from leftovers from mario from my blackberry) I knit it up knowing that it probably wouldn't work, and figured if it shrunk down too much I could save it for Evan. I found a pattern with a flat top which was the look I was going for. The pattern was designed with a much thinner yarn so I finagled the pattern a bit (cut out half of the stitches and about half of the rows) and it knit up quickly. 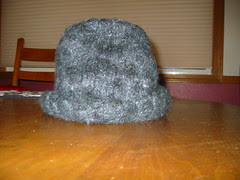 hat done
Originally uploaded by kbshee.
Yesterday I threw it in the washer for about half an hour (forgot to set the timer, but it's a front loader so that's not a problem) and the pulled it out..plopped it on my head (yes, while wet) and was surprised that it fit. I blocked it over a Crisco can to get the flat top look and now that it is dry, I can't believe it turned out pretty much exactly like I wanted. Flat top, rolled brim, and covers my ears. And very heavy, and since it is wool, it should be very warm. The thick thin yarn gives it a little texture, which is interesting to see. On the whole, I must say, I love it.
on December 13, 2005

Great hat. Glad it worked out! Felting is next on my list of things to try.