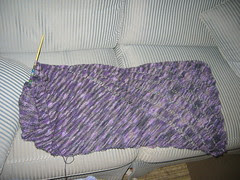 IMG_3520
Originally uploaded by kbshee.
It probably wasn't the best idea to take a picture of my clappy on the sofa, with the stripes and all.

I'm about 2/3 done. You can see the drop stitch pattern on the right side of the clappy. I really like this pattern (as you know).

Other news? Yesterday was a day of errands. Much of it was spent packing up my Kiwi and shipping it off to its new home in Antioch, Illinois. A KRer named Samantha was posting that she lost an ebay auction on a Louet so I emailed her asking if she was interested in the Kiwi. Several exchanges later, we had agreed on a price and checked out shippping options. So there ya go! The wonder of the Internet!

We watched about 2/3 of a movie, Junebug, that wasn't that good. It has received very good reviews but my theory is that once you've lived in the South, eccentric southerners just aren't that charming any more.

your clapotis is coming along beautifully! i love this pattern too -- so much fun to drop those stitches and watch it run!

that clapotis is fabulous!
Makes me want to try one..