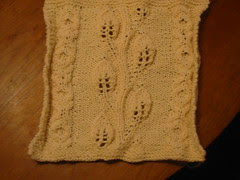 16? 17?
Originally uploaded by kbshee.
I finished this afghan square that I started last week to work on during the Oscars. It is one of the squares from the book, adapted a little bit...the square in the book had a spider and spider web but I prefer the simplicity of the vines surrounded by the xo cable on the sides. This is simple but it's really pretty, it is one of my favorite squares so far.

I only have a couple left, so I may finish this during this year after all!

Last week of class next week: I'll have 120 papers to grade as of next Thursday so I'm going to try to get far on the two projects in progress before then. I'm almost done with the back on the Mandarin Blouse.

Last night we watched "Walk the Line", which I liked but could have been shortened by about 20 minutes (in knitting terms, here's the major plot points: *he takes drugs, he cleans up,over 2 hours he wants to marry her, she says no, repeat from * til the movie is 2 hours long), the performances were very, very good and the cinematography was breathtaking (did this win anything for cinematography? It should have).

I started "The Year of Magical Thinking" which is pretty astounding. I don't think I've read any Joan Didion (maybe in college? I always thought she was an eastern elitist feminist writer, not that there's anything wrong with that, just not my cuppa) but I'm changing my mind.
on March 11, 2006