Which Jane Austen Character Am I? 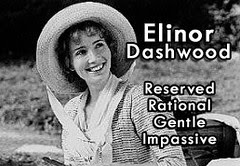 1117523207Elinor
Originally uploaded by kbshee.
You scored as Elinor Dashwood. As Marianne's older sister, Elinor lives at the other end of the emotional spectrum. She rarely reveals her intense feelings and is more concerned with being honest and loyal than having what she deserves. Even though her intentions are pure, she sets herself up for loss by constantly placing other people before her own needs. Overall, Elinor is gentle and rational but is just as capable of radical emotions (despite her withholding them) as her sister.


Which Jane Austen Character are You? (For Females) Long Quiz!!!
created with QuizFarm.com
on May 19, 2006