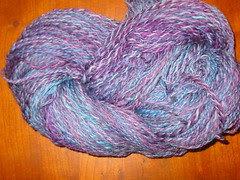 handspun
Originally uploaded by kbshee.
I'm having some bad knitting karma, so I will show you some handspun (bad knitting karma apparently has no effect on handspun). This is some of the beautiful fiber from Teyani and Klaus . My goal was to spin this 8 ounces into sock yarn sized yarn...not to make sock yarn (necessarily) but to see if I could do it (see, I also bought some superwash from them, and that will definitely be socks. If I can spin it sock yarn size). 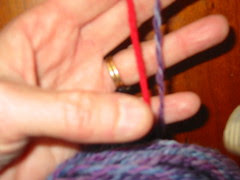 not quite
Originally uploaded by kbshee.
So the 8 ounces spun into about 400 yards of yarn (which is good, for socks, but not so good for other stuff..what do you do wtih 400 yards other than a scarf?). That's the good news. The bad news is that it isn't *quite* sock yarn, as witnessed by this scientific comparison with a strand of red Cascade 220 (which is worsted weight, I think). Oh well. The other good news is that there are certain places in this yarn where it is sock sized, so I know I can do it. Now to just be consistent.

The bad karma? Where to start. I spent 5 hours winding 800 yards of BMFA 'rio' into a ball yesterday: it is a very slippery rayon and I still have more than 300 yards to wind, but gave up. Not a great way to spend a day. I've started on the Lotus Blossom Tank from IK, but have had to start it twice because I keep making booboos. And I believe I made another one on the last row. Can't figure out whether to call it done on that and leave it til later, or to plow through. The mere sight of the words 'cast on 230 stitches' makes me shiver.

Anyway. Had coffee this morning with Jodie this morning. We're both excited about the new rpm sock pattern from Knitty and we're also having a Dye Morning next Tuesday. Additionally, we have a big summer surprise planned that we'll announce next week. Stay tuned! It will be fun!
on July 07, 2006

Sorry about the bad knitting karma, but the yarn is beautiful! I love the colors!

your spinning looks beautiful!!!
Do I sense a shawl in your near future???
OR, this weight of socks yarn can be knit with size 3 needles~ you'd only need about 300 yards for a great pair of socks :-)