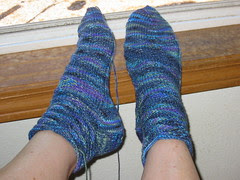 rpms
Originally uploaded by kbshee.
I finished the RPM socks from knitty.com. Well, not quite, as you astute photo viewers can see I still have an end, or two, to weave in, but then they'll be done.

The pattern is a bit difficult to see (go see Alyssa's blog if you want a better picture of how they look. But in person they look great. If I do say so myself.

The yarn: STR lightweight. The needles: Addis 0 (and one is bent now). I cast on 54 stitches. i did not do the cuff, I simply forgot. Five repeats of the leg.

I used the leftovers of the sock yarn to cast on the first square of my log cabin blanket...so if you find any yarn you'd like commemorated in my blanket, send me an email: kbshee AT comcast DOT net and thanks to all of you who have offered up your bibs and bobs of sock yarn for the cause.

I'm also working on a top down cardigan using cotton ease, and the afghan square. New pair of socks to go on the needles today too. And of course, seasons of mists and mellow fruitfulness, which doesn't seem to be getting any bigger sitting at the bottom of my knitting bag. I think in the back of my mind I'm hoping it slips off the needles so I can frog the whole thing. Bad Kim!!

In other news, we've become addicted to the HBO show "Deadwood" and have been watching the first two seasons on DVD. I'm surprised there aren't more knitters in Deadwood...can't you see Al Swearingen working on some gauntlets in his office above the Gem?
on July 28, 2006

Love your RPM's, great colourway. I've just got my second sock on the needles. I haven't got much leftover sock yarn at the moment, but I'm working on it!!

About LBT, mine has turned out mega big too. I know my gauge was a bit off, but I had to go down 2 needle sizes and made loads of decreases. Fingers crossed it's going to be OK. I love the colourway of LBT. Gorgeous!

Those are some spiffy socks! I just finished mine yesterday and just loved knitting them.

I'll be sending out some tiny sock yarn balls to you later this week:)