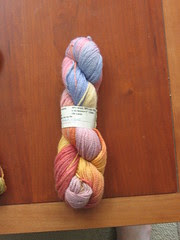 IMG_0006.JPG
Originally uploaded by kbshee.
This entry on Alaska is on perspective. This yarn, another from Rabbit Ridge in Anchorage, is an interesting look at perspective...if you look above the band it looks like one thing, below the band like another. Alaska is so big, how you perceive it depends on, well, the way you chose to perceive it. Confused?

We started our trip with a helicopter ride over the Mendenhall Glacier. I've never been in a helicopter before, and couldn't believe what a magical feeling it is to travel that way. You go from being on the ground to being in the air and it doesn't really feel any different. Flying over the Glacier, we had no idea on the size of anything...until we saw an orange basketball in the ice and asked our pilot about it, and he said it was the tent at our landing site. We flew high to get great views, but it was impossible to get any idea how big or vast anything was until we saw that little orange dot.

To go from a helicopter to our little Spirit of Discover boat was a huge shift in perspective. Our room was on the lowest deck, so opening our curtains gave us a waters-edge eye level view of everything...oh look, there's a humpback fluke right over there;, oh, look, that's an otter floating by on his back. It is a good thing our window didn't open or I'd have been reaching out to try to pet everything that went by.

Going up one deck, to the bow of the boat, brought even more views. The bow (and the 'weather deck' on the stern) gave us a panoramic view, and the ship kept someone on the bridge with binoculars looking for wildlife during most of our cruising hours. The vessel (as they call it) was small enough so we could clearly hear the engines shifting from 'full speed ahead' to 'idle', which signaled to all the passengers that someone on the bridge had seen something worth stopping for. Eagles perched in trees, wolves sleeping like rocks on the shore (but who politely woke up to be wolf like when we idled), a black bear and her two cubs, a 'bachelor pad' of stellar sea lions, and of course the magical whales; every day brought a new creature to the bow of the boat, almost as if planned.

But the best perspective of Alaska came in the little DIBS...the inflatable rafts that held about ten of us, including our DIB driver who ran the little motor. The DIBs put nothing...nothing...between us and Alaska. Whether it was getting close to the glaciers, to a flock of seabirds, or to the majestic humpbacks, we wish we could have spent much more time in the DIBs. Our full day we awoke to the good news that the weather had cleared and the 'DIB OPs' were starting that morning. We were idling among eight or nine humpbacks, and we watched enviously as the first few groups of passengers went out on the DIBS to spend time up close and personal with the whales (we were assigned a DIB group and the launch times were rotated so every group had a fair shot at being the first out on the water).

Our group was the second to last to launch, and we hurried out to where the whales had been seen (the thing about whales...they'll come to the surface and spout for a bit, and then disappear under the water, and it is impossible to figure out which direction they're going). By law, the DIB can get within 100 yards of the whales but then has to turn off the engines...if the whales want to get closer they can. After a few false starts, we finally found the whales and watched them spouting and fluking from the legal distance. All of a sudden, we heard a spout and behind us was a whale coming up to the surface, probably about 30 feet away. After that whale went back under, we turned back to the front and saw two whales slowly swimming toward us. These things are massive, and move so slowly and so gracefully it is sort of like watching a movie in slow motion. About thirty feet from us they gently dove beneath the surface and under our raft. I was both scared silly and enchanted by the whales (we had been assured they would never do anything to hurt us) and having them so close was such a gift. I'll never forget it. I keep replaying the moment in my mind.

Alaska challenged the way we looked at things, at many ways. And that's the best you can ask a vacation for.
on September 11, 2006

What a great vacation indeed! Your description made it very real to me. Whales, wow, what a gift!
Life is so awesome!! Thanks for bringing me along.

Wow! What a vacation! I'd love to go to Alaska some day. How awesome that you got to see whales so close!

Thanks for sharing your awesome trip!