In Which I Channel Alexis Carrington 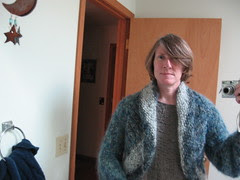 moonlight mohair shrug
Originally uploaded by kbshee.
Something about this shrug...maybe because it's a somewhat bulky knit, maybe because of the bling bling-ness..reminds me of something Alexis Carrington would wear (albeit to the grocery store or something like that, but you know what I mean). But still, I kind of like it. I made it a bit larger than the pattern (which only was 30" around) by adding an inch and a half to the body portion and several inches to the pick up ribbing.

As a reminder, I knit this for a couple of dinners I need to go to this fall that require something more upscale than black jeans and a sweater. I'll wear this with an Isaac Mizrahi skirt from target and something black on top. This is what passes for semi-formal in Eugene.

Cute! The color looks great on you:)

Ohhhh, this shrug is absolutely fantastic, and it looks so good on you! It's such a lovely pattern, and I also love the color combination! Fantastic job - congrats!

I like the shrug but I think if you plan to channel Alexis you need to go ALL THE WAY. Find a blonde with whisper-y at the event and start a catfight. Be sure to find a fountain.....it wouldn't be the same without it.