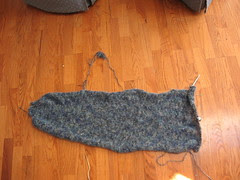 IMG_0036.JPG
Originally uploaded by kbshee.
I've slept for a total of, oh, 22 hours between Friday evening and this (Sunday) morning, so I'm feeling like a normal person for once.

But I thought I'd show you what I was working on during my sleep-deprived, sinus-infection-ridden week before I returned to my normal sense of being. This may look like a sleeve but it isn't...it is a one-piece shrug that is, believe it or not, about 70% done. The idea is to knit one big piece, seam the sleeves at either end (it is knit cuff to cuff) and then pick up and knit a collar around it. Similar to the Streaker's shrug I did a while back, only much less complex.

It's made out of Lion Brand Moonlight Mohair. Now, since I love all things moon-related, I probably would have bought this yarn sight unseen. But then I saw it...during my knit fancy schmancy scarves for gifts period....and thought I'd knit a bunch of fancy shcmancy scarves.

But that period passed. 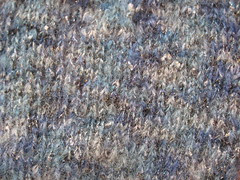 IMG_0038.JPG
Originally uploaded by kbshee.
Long story short...I bought a bunch of yarn that has been living under the bed (stash location #2) for way too long. But then...I received the new issue of the Lion Brand catalogue. They have really revamped that catalogue and have some great photography (the yarn is all still pretty so-so). I saw a picture of the shrug, went online and purchased the pattern, and as they say, vwa la.

To make the situation even more synchronous (sp?), the colorway I had in the stash is Glacier Bay (which we visited in Alaska a few weeks ago). Freaky coincidence, eh?

The yarn is blue, black, grey, and sparkly stuff. Did I tell you I'm making the shrug to wear to a semi-black tie dinner in November? So sparkly stuff is OK. In moderation.

Speaking of sparkly stuff, I just finished a book called "Sparkle Life' which was really good. It's the story of three women who are tenuously connected by the film business. Very well written. The author is Kara Lindstrom. I also read a book called "Lost and Found" by Carolyn Parkhurst. It's the story of several contestants on a reality game show (sort of like the Amazing Race) and how they react to the strain ithe show puts on their relationships. It sounds like it could be very twee but it was incredibly compelling.

What's up knitting wise? Christmas gifts, and the final (final!) afghan square for the Aran Afghan. I cast on for that on Friday (what was I thinking)?
on September 24, 2006

I love that colorway & how it looks knit up - although I could never knit with mohair. I got the Lion Brand catalog too & saw a few yarns in there that I thought looked good - but I was surprised by the prices!

I can't wait to see the shrug done! I like the Moonlit Mohair, but it's way heavy as a wearable for our neck of the woods. Your color choice is really nice.

I knit a scarf with that yarn in that color last winter. Even though I'm a fiber snob, I admit I like it:)

Thanks for the book suggestions. I just started a fun one called World War Z - it's about a zombie plague that spreads across the world. I love a good world destruction book:)