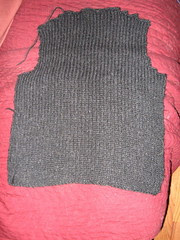 IMG_0223.JPG
Originally uploaded by kbshee.
It's been a bit of a busy weekend, but I have managed to finish the back of the Cabernet Ribs sweater from the new IK. THis is in alpaca/wool from webs and black mohair-silk from CP. I can't tell if there's a row that's 'darker' than the rest or it's just a trick of the light. Hope for the latter.

And no, I haven't woven in any ends. Maybe later today. Friday night I went to a wedding shower, and last night was Tim's office Christmas party (the theme=order the most expensive stuff on the menu). Yesterday we spent most of the day wrapping and packing presents for family. So not a lot of knitting time.

I have, though, somehow managed to read two good books. The first is the new book by Laura Zigman, called "Piece of Work". Light and frothy. The second one, which I'm almost done with, is "The Doctor's Daughter" by Hilma Wolitzer. It's sort of dark, about a woman about my age who is dealing with an ill father with secrets, a husband with secrets, and authors with secrets. Interesting.
on December 03, 2006

I've been wanting to read The Doctor's Daughter. Thanks for the information.

The color looks nice and even, but I have bad eyes;) Tis the season to be busy huh? Good luck with all your prep work for the holidays!