Decking the Halls for Dummies, pt 1

We started out to deck the halls and it began very nicely: we went to get the tree, picked out a nice one, brought it home, got it in the back yard (note to self...forcing the hatch closed may result in slight dents to said hatch. No big deal though). Then, since the rain had abated for a bit, Tim went out to hang lights on the outside of the house. Now, for the past few years, we've been replacing the obscentiy-generating cheap Target lights with brighter and energy efficient LED lights. We decided this year to use our LED light stash on the front of the house and then venture out to the hardware store to pick up more LEDs for the tree.

And now Chapter 1: Buying Lights. When the stores start stocking Christmas tree lights on, say, Columbus Day, take it as a sign and BUY THOSE LIGHTS. Because if you wait til December 9, here is what you will find:

Hardware store #1: big horkin' pine cone shaped LEDs in green or blue (we like our lights small and multicolored)
Hardware store #2: correct sized LEDs in either red or blue, or really ugly LED garland type light which looked like a 4-year old's block set with lights inside. (mild panic starts to ensue).
Sad Little Shopko Store: correct sized LEDs in white. Given ensuance (is that a word) of mild panic, we bought the 5 boxes on the shelves. Had a fleeting moment of joy when we realized that the boxes were priced at half off.
Mammoth Crazy Costco Store: no LEDs. But if we wanted Santas that you stick into the ground around your walkway that start singing whensomeone walks by, we could have had armfuls of them.
Neighborhood Variety Store where I swear I saw LEDs on Thursday: no LEDs.

Two hours, yes, two hours of shopping (or not) for LEDs.

Anyway. Not much other Decking of Halls happened yesterday as we sunk onto the couch and watched Pirates of the Carribean: Dead Man's Chest and called it a day. 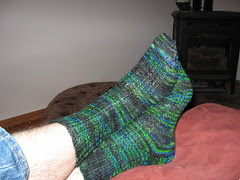 I also started not one but two pairs of socks for me: a pair out of the sparkly red Cherry Tree Hill (I'd like to finish these by Christmas, given that they're sparkly and all) and a pair from the new knitty: Monkey . I'm doing these in STR from the stash in thunderstorm (I think, not sure). But I've only cast on so there's not a lot of excitement to show you there.
on December 10, 2006

Nice socks! You're a regular knitting machine! Good luck with the lights!