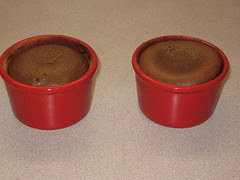 volcano #1
Originally uploaded by kbshee.
I got an intense craving for Chocolate Volcano Cake this weekend (actually, it was an intense craving for that 'chocolate cake with gooey chocolate inside', Tim remembered the name). A quick google resulted in finding this recipe which seemed pretty much what I was looking for. Two shopping trips were needed: one to purchase things like bittersweet chocolate and unsweetened cocoa powder, and the other to purchase ramekins, which we did not own until Saturday. 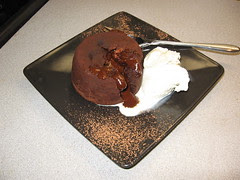 volcano #2
Originally uploaded by kbshee.
The cooking is actually a little complex since the volcano cake is done when the edges are firm but the center is still soft. And since a ramekin is only what, three inches wide, there is a small window between underdone and overdone (it says so right on the recipe, so it must be true). But we seemed to time it perfectly, as the result was exactly what we would have expected at a fancy schmancy restaurant.

And yes, there's ice cream on the plate (and cocoa. Tim is the artist). You actually need the ice cream to sort of cut the overwhelming sweetness of the volcano. But man, is it good.

Keep in mind, if you're going to try that recipe, that we made 2/3 of the batch and had enough for two 8-ounce ramekins and maybe a half of the third...not the four we were expecting. YMMV. 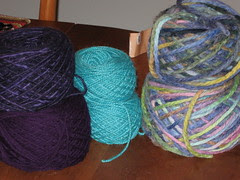 various yarn
Originally uploaded by kbshee.
I also got a craving to use up some yarn in my stash for a felting project, sort of a free-form bag. The yarn on the right is yarn I bought in Sedona...it was hand dyed there...and is a very bulky yarn. The yarn on the left is one skein of purple manos that I must have bought online or something because it started to felt on itself by itself. Beneath that is another skein of Cascade 200 in purple. You'll see the result tomorrow. And in the middle is some Misty alpaca that I need to knit up for my Shibori Felting Class at Madrona.
on January 15, 2007

Hi Kim
thanks for visiting my blog - and leaving nice comments too
i'm afraid i didn't like 'the abortionist's daughter' very much - found i had no sympathy with any of the characters and didn't like the style of writing. i thought the basic plot was good but could have been handled more effectively - as it was the book seemed to fall between 2 stools - not really a 'murder mystery' nor yet a novel about contemporary life. (one of our members said that jodie picoult would have made a better 'fist' of it - though most of the action would have been court-room scene!!) having said all this though, i have to admit to scoring lowest (3/10) where most of us gave around 5 - 7. (i was having a pretty 'grumpy' week though lol!!
this month's book is 'empire of the sun' - j g ballard. haven't started it yet (currently dipping in and out of complete works of oscar wilde) but have seen the film several times and just LOVE it!!
best wishes
rosy

Oh, those look so good! I'll have to try them, maybe for Valentine's Day.

The chocolate volcanoes look so YUMMY! I'm definitely tempted to make some.

Yum! One of my favorites! Thank you! I look forward to the bag, it's going to be pretty-I can tell;) Imagine, a yarn felting itself, like Twilight Zone yarn.

I was searching the internet to find a recipe for chocolate volcano cake and ran across the description of one on your site. Unfortunately it was dated back in 2007 and the link to the actual recipe is no longer working. Does anyone know what the actual recipe was? Of all the recipes I've found for chocolate volcano cake, this one looks (at least from the pictures)to be exactly what I've been searching for.
Thanks,
Mame