Yes, The Scissors are There for a Reason 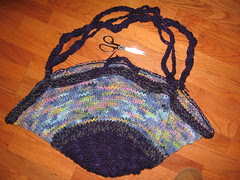 IMG_0335.JPG
Originally uploaded by kbshee.
Here's a before an after on the felted bag I made last weekend. Somehow I got it in my thick head that I 'needed' a new bag to take to Madrona. You know how it can be with fiber evvents...you want to "nonchalantly" be equipped with some nice thing that you knit so people know you're not a fly-by-night fiber floozy, but Knitter Damn It! Anyway. So I knit this bag. It used a lot of stash, including some I bought in Sedona last summer. It was this thick yarn, almost pencil roving, in Monet-esque colors. I didn't mean to get the bag so fan-shaped, but it was what it was (no pattern used).

The scissors, then (hey, is scissors spelled correctly? Because it just doens't look right to me) are used for measurement...that is, so you can see how big the bag was BEFORE felting and then the compare to the AFTER. It's what geologists do. Thus, being married to a former geologist has a few perks. 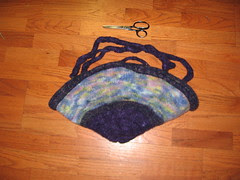 after
Originally uploaded by kbshee.
So it shrunk down, the Monet colors got much more Monet-like, and Tim saw it and immediately starting calling it " The Giant Nipple". Which, while true, is just sort of gross.

But I'll use it anyway. I'm not sure that stuff won't come spilling out of it, but maybe I'll just use it as a knitting bag. Because really? I have enough stuff to take to Madrona. I'll just wear my Lady E and my clappy and call it a day.

Lots of WIPs here. In addition to the SLP and two pairs of socks, I want to finish at least three hats for Kate (maybe four) (taking hat stuff to Madrona) AND I have homework for Madrona...six 'samplers' (aka large ass swatches), four out of alpaca and two out of wool. Ten inches, dear readers, ten inches square these samplers need to be. Three are done. One is on the needles. They will be done.

And...I spun yesterday, for the first time in months. Months. Since I'm taking a spinning class next Friday, I figure that I should at least put up a good front of being a Spinner.

That's a really nice bag! And yes scissors is spelled right. Don't you hate when a simple word does not look right? By the way, your scissors grew larger!