So Nice, I Knit it Twice 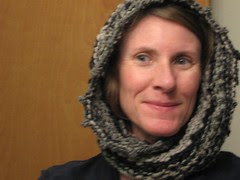 Let me start by saying I think Cat Bordhi is a Knitting Genius. I learned how to knit socks from her book "Socks Soar.." and I love both Treasuries of Magical Knitting because I think Moebius knitting is just about the most fun knitting one can do. Seriously. I love you Cat Bordhi!!! Can't wait for your new books!

This moebius was posted on her website...it's more of a 'hood' or a 'wimple' than the ones in her book, which I like because I do like a bit of scarf around my neck when it is cold and damp. And I love that you can pull it up around your head. 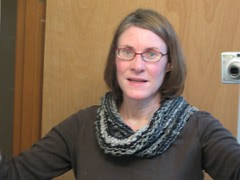 moebius 1
Originally uploaded by kbshee.
Remember that black-to-grey handspun I did a week or so ago? I used that to make the scarf. I love how it looks, and how it is sort of neutral but sort of not. Of course, it would look better if I spun it more consistently, but that is neither here or there.

I tweaked the pattern a bit, finishing it with a picot bind off to give it a little more 'personality' around the edges, and I do like the effect.


But. Here was my problem. I hadn't knit a moebius for a while, and forgot that when the pattern says "cast on 80" that you count every 'scoop' as a cast on, not one for every two scoops (if you don't know what I'm saying, then just nod and follow along). What that means is that the first time I knit this, I mistakenly cast on 160 stitches rather than the suggested 80. And I knit the whole thing. I only had 150 yards so we're not talking a lot of knitting, but still. You know. Anyway, I finished and instead of having a moebius that sort of snuggled around my neck, I had a moebius that that baically fell to my knees. Oops. So rip rip rip and here it is again.

Looks great! How neat you spun the yarn too. :)

It is beautiful. I really like your handspun yarn and I think it contributes a lot to the look of teh moebius. I have been thinking of knitting a moebius like that but did not realize there was a pattern. I think I will check it out!
Punkin in Oregon

aw Kimmy! You're so cute! Your Moebius is great ! I was lucky enough to catch the Knitty Gritty episode with Cat working it. Seeing it in action made all the difference for me. I only have the 2nd Magical Treasury,and I do adore it! P.S. Don't tell Stella I said you're cute, she may get mad at me;)

Love your Wicked too.

It's lovely! I don't think spinning it more consistently would be better. I looks fantastic as is.