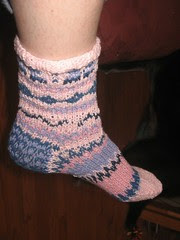 play #1
Originally uploaded by kbshee.
I'm a bit concerned...I think I have either Carpal Tunnel Syndrome or Repetitive Stress Whatever. I think it comes on when I spend too much time on the computer (it's the trackpad, not the typing, that gets me) and it really kills me when I'm knitting, especially on size 5's. It sounds silly, but smaller than that is ok, and larger than that is ok too. At least I can knit a bit longer before I have to stop.

These socks...the "Play" socks...were knit on 4s, and the pattern was just made up as I went along. I'll do another sock to sort-of-but-not-really match. This was so fun to do. And I love the yarn. But you knew that. 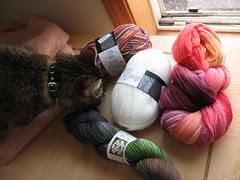 IMG_0500.JPG
Originally uploaded by kbshee.
Jessie Cat is in charge of Inventory Control for the Sock Yarn Stash. More yarn has joined the group: the first sock yarn for 2007 from STR, some bright happy yarn from Mystical Creations at etsy, and my first kit from the Red Bird Knits sock club for Latvian WEdding socks. Those should be awesome. 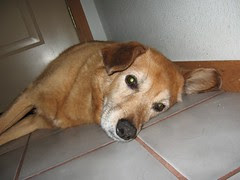 Happy Birthday Cody! Your mom is definitely all about the socks! And really nice ones too! love the Play, the heels are really awesome!

Birthday wishes to Cody! He doesn't look a day over 9. :)

I'm the same way with mouse vs. keyboard as well as needle size. When I'm on size 5's I make sure I take a break every half hour or so otherwise I get that weird feeling in my lower arm.