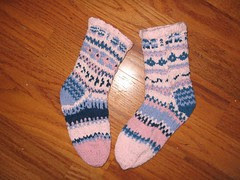 plays!
Originally uploaded by kbshee.
Spring officially starts on, when, next Monday or Tuesday? It is finally starting to feel like spring here...great smells in the air, little grape hyacinths busting out in the front garden, and last night about a dozen of Cody and Shasta's four legged buddies were at the park a few doors down in the early evening...the first of many evenings when our 'dogs on leashes only' turns into a Renegade Dog Park for an hour or so.

Oh. And spring socks. I finished the play socks...keep in mind that this is only my second 'real' fair isle project and I totally forgot to do something about that jog when yo ucome to an end of the row. Anyway. These were totally free formed...aside form the pattern at the tip top of the cuff I made this up as I went along. Very fun. 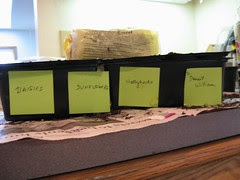 3-14-07
Originally uploaded by kbshee.
And one more promise of spring. I spent an hour or so on Sunday descimating our front garden. Here's what happened. About six years ago, I planted some type of plant that displays bright red little flags during July and August. The hummingbirds love it, it was very drought tolerant, and I think it was related to a tobacco plant. Anyway. Two years ago we focused on killing the morning glories that had taken over the front yard and gardens. Well, apparently once we killed the morning glories, we allowed the mysterious Red Flag plant to have Free Reign over the front garden, and it put out shoots everywhere, I mean everywhere. So I started out with maybe two of these plants, and now (well, before Sunday) there were probably eight or nine. They didn't seem to choke out other plants, but there were just too darn many of them. Anyway. I pulled as much of the plant out of the front garden, and now of course need something to replace it/them.

So, I'm going to start some seeds inside...this is NOT something I do as in the best of times I have a very pale green thumb. But we'll see. I'll get you posted of my progress here, but just to get started, here are the newly planted daisies, sunflowers, hollyhocks and sweet william. Keep your fingers crossed, especially if they're green.
on March 14, 2007

Kim the Plays socks are darling! And I didn't even notice the joggies. My eyes were distracted with all the other fun stuff going on. :-)

grape hyacinths--Thank you! I have those in my yard but didn't know what they're called because I am not at all a gardener.

Great Spring socks! And good luck with your seedlings. I'm going to start some zinnias this week. C'mon Spring!

That's why I started mine as seeds. Less of a loss if they die due to my brown thumb.