Catch Up (or Ketsup, depending where you live) 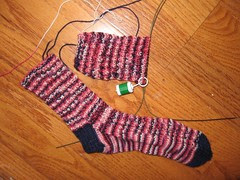 IMG_0728.JPG
Originally uploaded by kbshee
1. No news yet on Cody, although we know the tests are back but can't get a hold of our vet. He seems fine (more than fine, actually) so I'm looking on the bright side. More as we know. But whatever is wrong, we'll do what we can to take care of it. He's our Cody dog. He'll be OK. UPDATE: a low grade sarcoma on his leg, which means there is a low probability that it has spread. Hopefully we can remove it and call it a day. We'll learn more about surgical options next week.

2. Can I tell you how much I absolutely adore the Sailor Girl colorway from A Swell Yarn Shop ? I'm making socks in Skinny Duets and I've just seen that Pick Up sticks has the Duets in the same colorway. Love this so much.

3. While I'm itching to buy above yarn, I'm trying to be good, since I'm a bit overloaded on the Sock Yarn right now. The past week brought yarn from three sock clubs (Red Bird Knits, Pick Up Sticks, and STR) and I need to take some pictures today to make sure I know which pattern goes with which yarn (not that it's that important, but the patterns are beautiful and I want to make them all!).

4. And in case I don't belong to enough sock clubs, a certain Sock Club Obsessed Blogger Who Will Not Be Named suggested that I ought to join the Zen Yarn Garden Sock club, as well as mentioned that there was a Harry Potter Sock Club starting. Enabler! Enabler I say!

5. And don't forget Yarn Pirate. Although I can't blame the unnamed sock obsessed blogger for that one. 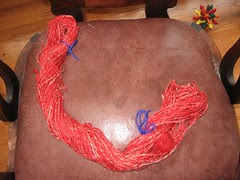 6. I spun. Border Leicester in this fun candy cane color. I spun this woolen which I don't think I'm supposed to do since it is a long staple but I did it anyway. I'm pretty much a Rogue Spinner.

7. I took a mini-road trip to Mountain Shadow Ranch which is about 20 minutes from my house. Teresa raises sheep (and a llama, hi Sierra!) and sells Louet yarn and fiber from a barn next to her house. She's open Th-F-Sat from 12-4 and you can get directions from her website. Gorgeous fiber. Plus she let me touch some Vicuna. But only touch. It's $250 an ounce. That is not a typo.

8. Today the first clue for Mystery Stole 3 was posted. I will try to do this, although I thought it wouldn't be a pointy shawl and apparently it is. Oh well. Those MS3ers are a chatty bunch...today I had almost 100 messages in my in box about the new clue (luckily they were organized into groups of 25). (Edited to add: another 50 messages came in. In an hour and a half).

9. We are finally, FINALLY, Doing Something with our front yard. Two years ago we covered the entire front yard (and we're talking maybe 300 square feet here, so it's not that big) with weed barrier and mulch to try to kill the morning glories that have invaded our yard and killed our grass. So now after living with what looks like a yard that was in a nuclear holocaust for a year we're prettying it up. It began with the planting of five quaking aspens and is now moving toward a garden in the middle. THe difference is amazing.
on June 29, 2007

LOL at the reference to Alyssa! Did you hear we are GIVING her a sock club as a going away present? Could there BE a more perfect gift?

She is my sock club enabler

I subscribe to only the Special Announcements and look at the group for the other stuff.

Fingers still crossed for Cody! It does sound encouraging though! You're just a crazy mad knitter woman! I can't believe all the stuff you get finished! Photos of the yard!!!

You are making me want to cast on my sailor socks, but I have so much going on right now...but they are so pretty...

And who is this enabler? She sounds great. hehehe

I think the mystery stole is going to be a long rectangle with pointy ends, not a triangle-shaped shawl. I'll be back in Oregon after the 4th of July, and one of my must-see stops will be Mountain Shadow Ranch.