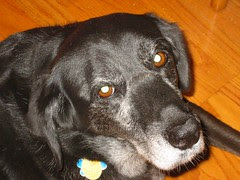 shasta
Originally uploaded by kbshee
Seven years ago, on a Good Friday, we went to Greenhill Animal Shelter to see about finding a friend for Cody. Our thought was to get a young adult pup...about two years old...who would be post puppy stage but still young enough to train.

The few young adults were not good fits for us (a bit hyper, those dogs) and we were about to give up when the Shelter manager, Tom, said "you wouldn't think about an older dog, would you?". We said we might.

He introduced us to Renee Louise, who had come in with another dog who was completely shellshocked. Renee Louise, though, seemed ready to go home. She was brownish black, already turning white, and was docile. We learned she had never been in a home, had likely eaten from a bag of food thrown in the back yard, and that she came into the shelter covered in tick and flea bites. She was around six...maybe a bit older, no one really knew. She had lived rough for however long she had lived.

And so it was time to change that.

Cody met her, and gave a big wag that she could come home. We knew we couldn't call her Renee Louise, and Tim named her Shasta. And so Shasta she became, and Shasta she lived, until about 9:45 this morning, when we put her gently into the long sleep.

She was filled with love for us. She loved Cody and her cousin Gus. Other dogs were merely tolerable, if not her sworn enemies. She raised our cat Stella from her kittenhood, to the point where now Stella occasionally 'barks' along with Cody. She was the patient petting dog for neighborhood children.

She wasn't a perfect dog...she got car sick (even on quick trips around town), she could have her unpleasant moods, and she loved a good poop snack. But she would give up her life for us, and guarded us tiredlessly. She was brave, she was loyal, and she was loving. What else could one ask for in a pup?

She was never sick, or never let on that she felt bad. It wasn't in her job description. So when she stopped eating about three weeks ago we were a bit worried, but thought she would bounce back. She didn't. A tumor, probably lymphoma, in her chest cavity caused even sitting up to be an endurance test. She just wore down, and gave up the fight. And while we weren't ready for her to go, we knew it was time.

We love you Shasta. We'll always love you and we'll never forget you. You have a bit of our hearts with you. Good Bye, sweet girl.
on June 12, 2007

What a wonderful memorial to Shasta! Hugs to you, Kim.

I couldn't stop the tears. What a lovely tribute to Shasta. My thoughts are with you and Tim.

I'm so sorry you lost her! Sounds like she was such a great member of the family & what more could you ask for? What a sweet memorial for such a nice dog!

Bless you all. Godspeed, Shasta.

Your friends at Arkansas Labrador Rescue, and Camille
www.arkansaslabradorrescue.org

Dear Kim
So sorry to read of your sad loss. The lovely things you have written make it obvious how big a part she played in all your lives. May she sleep well. I am sure her memory will live in your hearts forever.
With love and kind thoughts
Rosy in England

I was sorry to hear the news about Shasta. My thoughts are with you. Give Cody an extra hug from the elkhound clan. Kay in Vancouver WA

I'm so sorry for your loss. She looked sweet.

I am sooooo sorry about your loss!!! You gave her a second chance that few homeless dogs get and in return it sounds like she gave you lots of love!!! She was obviously a great gift and I am sure she will be missed!!!

Oh Kim, I'm so very sorry. You guys gave Shasta a meaningful life and her well deserved dignity. She'll wait for you at the Rainbow Bridge. {{HUGS}}

In catching up this beautiful Sunday morning, I clicked on your blog to see what you had been up to....tears run down my cheeks in sorrow...hearing of Shasta's farewell!
I know that she was SO very lucky to have been loved by your family!!
Keep faith...I know that they never leave us!!

Oh I'm so sorry :( I just lost my maddie, too, and know just how you're feeling. She was adorable - try and find comfort in the love you gave her and that she gave you; that's the greatest gift of all.