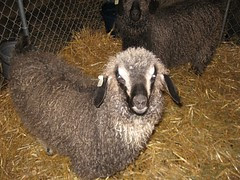 goat
Originally uploaded by kbshee
I had a wonderful weekend (and I"m posting this at noon on Sunday, so I still have time left to enjoy it, although the weather is cool and a bit rainy so I think I'll be hunkered down with a book and knitting this afternoon).

We spent yesterday morning kayaking at Fern Ridge Lake, which was very nice...I wish I was a bird watcher because that has to be bird watcher paradise. We saw several herons and (we think) a flock of pelicans (flock of pelicans? What is the collective. for a group of pelicans?? Edited to add: it's either a Pod or a Scoop of Pelicans. Now you know. 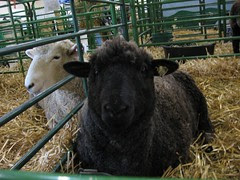 sheepies
Originally uploaded by kbshee
Then back to the Black Sheep Gathering where we looked at the sheepies and the goats (above is a goat, these are sheep, duh). (Black sheep. Get it?) We also went to the Alpaca Show which was really poorly attended. In fact, I thought the market was pretty sparsely attended for a SAturday afternoon. Anyway. Maybe the big knitting boom is really over! Or maybe everyone was in classes. Who know?

We enjoyed seeing the sheeps and the goats (did we miss the bunnies?). We ran into our friend Zanne with her twins and chatted with them a bit.

Nothing else was purchased. I know, I can't believe it either. 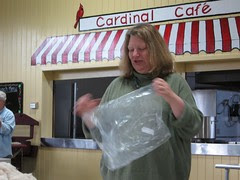 jmm, I worship ye
Originally uploaded by kbshee
This morning I took a class from the marvelous Judtih McKenzie McCuin. The title of the class was three wild downs but I think we ended up spinning five different fibers, and some of the fibers we spun in a couple different blends. HEre is what we spun:

-bison...really beautiful stuff for spinning.
-yak: so cool. This is theoretically the least expensive exotic fiber that you can get now...blended with silk it theoretically makes great socks. I still think it is something like $5 an ounce but I'll check into it and let you know.
-qiviut: there's a shortage of quiviut now because the only North American qiviut processor died and now all qiviut goes to Peru for processing (qiviut is the down of the Musk Ox). But someone from the Portland Zoo brought some down for us to sping.
-cashmere. Enough said. 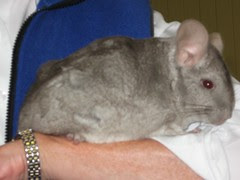 chinchilla
Originally uploaded by kbshee
Linus! The chinchilla. Apparently there's a huge movement to move chincillas (chinchillae?) from being a pelt animal to being a fiber animal.

Spinning chinchilla was fine...it was blended with some silk noil so it was a bit on the nubby side. We spent most of the class doing long draw, which I'm very comfortable with...but others in the class weren't. I think when I spin the red and white fiber I got yesterday I'll do it with the long draw. I also want to get some Yak to make some yak sock yarn. But sock yarn should be worsted. See what I learned?.
on June 24, 2007

Looks like you had super fun at BSG. If I had the time, I'd like to learn to spin too. But not yet I guess. H

Hope you are enjoying the Rowan pattern, there are lots of lovely things designed by Rowan.

I was told there were no bunnies this year. Bummer!

Hey Kim,
hope you enjoy your angora top and all the other goodies you brought home from BSG. (I'm still groggy-tired, better go get some more tea).

BTW, that's a great idea to donate to Heifer for every ball used from the stash!

Awww What cutie pies! Linus (my cat's name) is adorable. Nice to know about the movement on their behalf.

Judith is just incredible! I have been fortunate enough to take her low-whorl drop spindle class one year at MDSW, then her 3-day Spinning for Socks class (with Nancy Bush!) at SOAR, then both her Intensive Spinning and Spinning for Knitting at Maryland last year. I just ran into her at Big Sky Fiber Arts in Montana and now wish I'd taken her dyeing class. Yours sounds like a good one!

I'd love a class with JMM and Nancy, although I'd be in such awe I don't think I could do a single thing they'd ask.

Wow I saw you on Knitters REview Forum. I too wasi n that calss, wasn't it great.