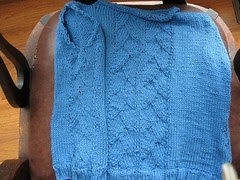 IMG_0690.JPG
Originally uploaded by kbshee
I finished the Icy Blue Tank from the newest issue of Creative Knitting. I'm usually not very interested in this magazine but I really liked this tank (and it's not really a tank, come to think of it, maybe it's called the Icy Blue Shell). It has dragon scales down the front and also under the arms (hence the odd picture).

It's hard to photograph though.

The only problem with this knit was that it was too short...it barely hit my waist when it was done. So I picked up stitches and knit some ribbing around the button. If I do it again(which I might) I'll add four inches or so to the bottom.

It is almost the end of a busy week: honors reception this evening and graduation at 9 am tomorrow. Sunday is not only Father's day (but since we don't have kids that's not much ofa thing) but it is also our anniversary: number 12. We plan a day out with the kayaks and Cody (and we might even try to get Cody in the kayak with me).

It is almost the end of a very hard week, as you know. To make things harder, my brother (he of the toes) is back in the hospital hooked up to some type of vacuum thing that is to make his foot heal more quickly. We've been talking (and laughing) a lot, which is great. We also sent him a nintendog since he can't do anything but be in bed and that might just drive him crazy. So please hold a good thought for Bart for a day or two. Hopefully he is on his way out of the woods but I'll believe it when I see it.
on June 15, 2007

What a nice shell, Kim. I'm not a big fan of Creative Knitting Magazine but they do seem to have a nice pattern every now and then.

Just wanted to say I hope your brother is healing quickly.

The Nintendog is a nice gesture. Hope he likes it.

Have a great anniversary!

Hi Kim
The tank looks lovely. great job!
I hope you have a wonderful anniversary on Sunday.

I was sorry to hear about your loss. I'm sure Shasta will be missed, and that you'll have a lot of happy memories of her. Thinking of you.

Have a Happy Anniversary!

Glad to know that you and Bart are talking and laughing and I hope that his foot does better with the new treatment.

Happy Anniversary to you both!
Love still glistens in your eyes!!
I hope that your day brings much rest and happiness!

Very nice Kim! I went and ordered that issue because of you...PUSHERRRRR!!!! Bart is in my thoughts and prayers, hope he has very speedy recovery! And a very happy anniversary!

Pretty top, but bummer about the shortness.

Sending good thoughts to your brother. Which Nintendog did you get him? :)