Stick Some Forks in Some Stuff 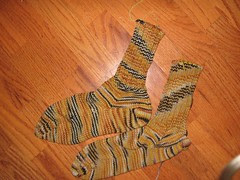 rabbit ridge socks
Originally uploaded by kbshee
...cause they're done.

Yes! The spring term is finally over! It was a bit of a rough one...spring terms are always full of visitors and end-of-year stuff going on, plus I was sick, Shasta was sick, my brother was injured, and I had that conference to run. But it is over! And everything is happier. Graduation was nice, the honors event was fun, and now I have a week off before I start my 4-week summer class. Which should be pretty low key, I would hope. We'll see.

Also done: these socks using yarn I bought last summer when we were in Alaska. They're for Tim...they're knit with worsted so they're pretty thick, in the EarthSomething colorway from Rabbit Ridge Dyeworks in Alaska. Very soft yarn. Very handsome, imho. 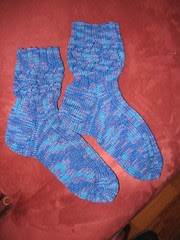 horcrux
Originally uploaded by kbshee
Also done are the horcrux socks...the socks with the Harry Potter lightning bols on the leg. I loved knitting these socks, and I love the Crystal palace panda cotton. It is a bit splitty, but the KNitpicks options needles take care of the splittiness just fine. I need to block these...the socks use a 3/2 ribbing except for the lightning bolt part, so that part tends to poof out a bit. I like these so much I may submit them to the Lane County Fair this year. We'll see how they block.

We had a nice anniversary yesterday....Tim gave me a necklace he had made with a stone we bought together during one of our journeys, and I gave him a diamond stud to replace the one that disappeared somewhere a while ago. We took Cody and headed up the McKenzie river with the kayaks to a beautiful lake called Suttle Lake. It is a longish narrow lake, and there is plenty of room for fishing boats, kayaks, personal water crafts, and rafts. Cody met a new dog friend named Bella, and tried to teach her how to fetch in the water. She was a little skittish, but gave it her all. It did us good to see another dog that was rescued and now is in a loving family. I wanted to kidnap (dognap?) her and take her with us, but decided she might be pretty content where she was. suttle lake
Originally uploaded by kbshee
It was a bit chillier than we expected, so this picture of me features me in my summer hat and a fleece jacket. It was also a bit windier than we've experienced in the gentle confines of the Canoe Canal, so it was a bit of a harder paddle in a couple of ways. It was good experience, though, as we plan to go to Canada this summer to paddle in some ocean bays and it probably won't be gentle waves there!

I have a couple plans for this week, mainly knitting related, and we'll hopefully get a quick paddle or two in also. I also need to finish up my book which is due to the publisher on 7/1. It is almost there.

Thanks again for your kind words during the past tough week. My brother is doing well...the treatment at the hospital seems to be working very well, and the last step...a skin graft...will probably be in a week or so. More importantly, we've had some great talks and hoepfully this will continue. So every dark cloud does have some type of lining there. Who knew?
on June 18, 2007

I love those horcrux socks! I think I'll cast on tonight. :)

You Oregonians are so outdoorsy. Will I become that way too? Is it contagious? ;)

The socks are really nice! I'm so happy that everything seems to be settling down a bit. It's time:) all this, and you're writing a book too?

Sounds like a great...although chilly..way to spend your anniversary in the PNW...when will Summer get here? Probably with a vengeance like happens.
Looking forward to seeing you at Black Sheep this weekend! ;)
Glad that things are on the upswing for you!!

Hi Kim--found your blog through VVSwap and finally found another Oregonian! Judging from your picture, it looks like a great paddle...myself, I'm going to do some river kayaking this weekend as well but over here in the dry part of the state! Also saw you are reading Vegetable Miracle by BK...on my list to read this summer(loved all her others)...curious to know opinions on that book. Just wanted to leave a comment...sounds like you've had a tough couple of weeks...take care.