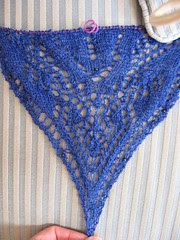 Row 61
Originally uploaded by kbshee
We begin today with evidence that while I can knit lace, I don't knit lace very well. This is the first 61 or so rows of Mystery Stole #3. I thought I was doing pretty well until I looked at the blogs of some other people who are also doing MS3, and their lace is drop dead gorgeous.

I do have some lace rules for myself:

-if the row count is one stitch off, then M1 is your best friend

This is Zephyr yarn,a nd there are even beads in this although hard to see, and I'm not sure if they are enhancing the project or not. But beads. And lace. Good for me. 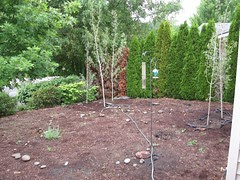 front #1
Originally uploaded by kbshee
And more visual evidence that indeed we are not living at the site of a crater hit or a nuclear event, but rather we are concerned and caring homeowners who are trying to make our neighborhood beautiful. Two years ago we covered our weedy lawn with weed barrier and mulch in order to kill off the pretty yet lethal morning glories that had taken over the lawn. We did a pretty good job, and finally decided that it was time to make something out of our front lawn. .

Step one: the purchase of five quaking aspens, three ina 'grove' in the enter of the picture and two to the 'right'. 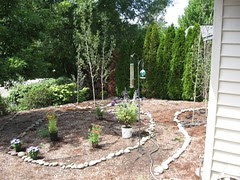 front #2
Originally uploaded by kbshee
Step 2: two trips to the riverbed to pick up buckets of river rock


Step 3: three visits to three different nurseries (Saturday Farmer's market, Grey's, and Down to Earth) to get some plants for the center garden.

We now have sweet little rock lined paths around the tiny front yard and a garden in the middle that will soon host a butterfly bush, a foxglove, some yarrow, and some coreopsis, as well as rogue lavenders from around the yarn and several creeping plants that should serve as groundcover. Tim will be toting in some dirt to build up the center garden a bit and then we'll get planting. We also bought some bushes for the 'perimeter' of the yarn (ie by the fence and the house) to green that up a bit.
on July 01, 2007

I love quacking aspen....great for duck country....what fun to garden. It's looking great and will be more so next year! I am learning to wait and see what becomes of the work...
Speaking of which, I think that your lace is quite lovely! Lace knitting isn't for the faint of heart! There are so many great lace patterns out there. I am hoping to master it one of these days!

Yeah lace knitting! I'm glad you are doing this also. I haven't started because I don't have enough lace yarn for the project. Everything I have is about 800 yards instead. I'm thinking of getting some Zepher, how do you like it?

Hi Kim--thanks for your comment on my blog...looks like we are continuing to do similar things...I too started a lace shawl (my first) and I think I like your rules! I do love the pattern but having a concentration problem! Also, I like the pics of your yard in process...we are there too and it's such a long process (though I never thought of planting aspen..too dry here I would think but they will be beautiful!).

Wanted also to say that I really like Eugene...I worked for 6 months in timberlands outside of Springfield and near Cottage Grove and really liked being able to come into Eugene on occasion...great city!

Let me know if you head to the beautiful Wallowas and come through this area again!
Take care and keep us updated on Cody!

Looks great! I love working in the garden :)