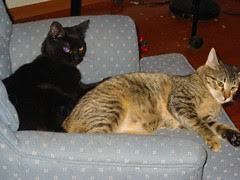 stella (left) and jessie (right)
Originally uploaded by kbshee
Cody is good, Juneau is good, and Tim and I are good, but our little cat, STella, isn't. She's had a seizure disorder for, what, two years now? We've been treating it with chinese herbs and it has gone OK...some weeks are good, others not so good.

But recently, unfortunately, the seizures have gotten worse. And in the last few weeks, we've had a couple of days where she's had two seizures within 24 hours, and once the seizures were about 3 hours apart. In the best of times, she's having a seizure every two or three days. So we knew we needed to make a tough decision to take her treatment to a different level.

The pharmacological treatment for seizures is phenobarbitol...the drug used to put animals down. It is, as you might imagine, a pretty dangerous drug, and generally requires constant monitoring of the cat's blood levels to make sure nothing is becoming too toxic. And Stella cannot, CAN NOT, go to the vet. She goes, literally, berserk. So we really didn't think phenob. was right for us.

Tim met with our vet, Priscilla, yesterday, and she agreed to try a very, very mild dose of phenob to see if we can break STella out of this seizure pattern, and then perhaps ween her off the drugs after a while. The dose will be so mild there is almost a lack of concern of toxicity, and if she starts to seem overly lethargic we can take her in and see what's what. So we started that treatment this morning. We're not happy with it, but at this point we don't know what else to do.

And in fact, she had a seizure this afternoon, but it was a slow motion seizure...much less violent than her seizures usually are. And shorter. And she recovered pretty quickly.

Poor little Stella. She had a tough start to life and it continues to be tough for her. While we're sorry we can't find a better treatment, we hope this will bring her a bit of relief.

In other news...yesterday was my three year blogiversary. Three years! Hard to believe. Thanks for sticking with me.
on August 03, 2007

Happy Blogiversary! I keep thinking of what a great family you are to your adopted furry members. It warms my heart to hear about the loving care you give them.
Punkin

Good luck with the treatment. I had an epileptic dog which I treated for seizures for about four years. All went well for a long time but in the end it seemed like the drug wasn't working anymore & we found out our dog had a liver only half the size of a normal liver so it had become unable to process the drug. But I think it works fairly well for normal animals since it worked so well for so long for our dog even though he had that liver abnormality. I'm just glad little Stella has owners who love her so much & give her quality of life so much thought.

Happy 3! And lots of virtual loves and kitty kisses to Stella.
~Rufus, Ruby and Rosemary

Well Happy Blogiversary! 3 Years? Wow!!! I am so sorry to hear about Stella. But like you say, it needs to be taken to the next level. You and I have talked about this stuff before (I think that's how we "met"). Linus has been having almost no seizures since I installed a water filter on our faucet. I could be really wrong, but maybe a chemical in the water treatment process that doesn't show as a toxin in blood tests? I don't know. I do know I hope Stella gets some relief with her meds. {{Cyber kitty hugs Stella baby}}

Poor Stella, I hope this treatment brings her some relief.

My goodness you are having a tough pet year! Best wishes going your way for Stella and that that treatment works!
Congrats on Janeau! Beautiful pooch! Amazing coloring!!!

Happy Blogiversary! Sorry about your cat. Hope she gets better!