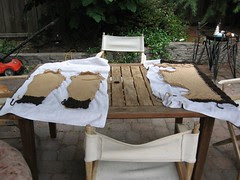 IMG_0880.JPG
Originally uploaded by kbshee
I finished the sleeves and now the whole thing is being blocked. I think it will end up a bit snug but it does s-t-r-e-t-c-h.

It's nice to do something fast, and even better, something I like. And it gets a bunch of stashed yarn out of the closet, which is one of my summer goals. It makes returning to my thin-yarn-on-small-needle projects a bit on the refreshing side! Who knew?

Other than that, I've been finishing up a couple of academic papers and doing a bit here and there on the MS3. I wasn't rushing forward because of the 'mysterious life line' and then I was dithering about whether I would do the 'wing' or not. But then I decided, and now I'm plowing ahead. I'm easily a week behind but so be it. It isn't a race (is it?).

And...am I the only one in the UNIVERSE that hasn't received the new IK?? I'm so frustrated...I'm itching, ITCHIGN to cast on for the tangled yoke cardigan!!
on August 08, 2007

I haven't received the new IK either. Maybe it's something with Eugene.

Do you want to get coffee tomorrow? 9 or 10? Palace Bakery again?