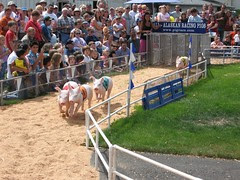 pigs 1
Originally uploaded by kbshee
...as we had a busy day yesterday, putting up an extension to our privacy fence (to house the kayaks) and then spending some time at the Pig Races.

The what, you ask?

The All Alaskan Pig Races, which was a featured attraction at the Lane County Fair and really the only reason I wanted to go to the fair. Long time readers of my blog know that Tim and I usually enter a number of different crafts and food categories at the fair, but this year we didn't...I think we were busy with the dogs and with other stuff, and also they instituted an entry fee which sort of sat badly with me, blah blah blah, so we didn't enter anything (and it was pretty evident that entries in all the categories, including livestock, were down).

So my two big goals of going to the fair was 1 to get one of those mounds of curly fries where the cut a whole potato into fries and fry it whole...if this doesn't make sense to you then you've never been to a county fair and 2. to see the pig races. 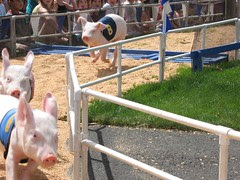 pigs 2
Originally uploaded by kbshee
So. The pigs race on this track which is probably 40 or 50 feet around, so the race goes pretty quickly (as do the pigs). There are two heats of four, and the top two finishers go onto the finals. Tim wonders, though, whether they only have four pigs and they just switch out the numbers (see on the picture, #8 in the blue thing) and just run the same four pigs. Who knows. The pigs were so cute and ran so fast that it was almost impossible to get pictures. And they seemed to have a good time doing it (lots of pig chow at the start and at the end, lots of cheering and adoration).

Because the actual racing time for all three races is only about 2 minutes, the MC spent a lot of time making bad alaskan pig puns, getting the kids in the crowd to cheer, and generally being entertaining. He actually did a good job, and it seems like he really likes the pigs. But maybe that's me just hoping for Humane Treatment of Pigs.

Oh how cute! I have to check this out. My kids will love this :) Seems unfair to suddenly charge to add a special feature the event. It always comes down to the $. I'm sure if were there, we'd have picked #8 ;)

We saw pig races at our tri-county fair, too. The people that did them came out from the midwest somewhere - Iowa or something. It was pretty fun and hokey - all of their pigs were named after a famous person with something piggish changed in the name.