Oh What a Tangled Yoke We Weave 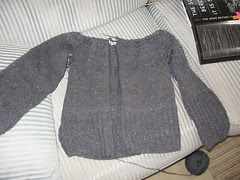 IMG_1069.JPG
Originally uploaded by kbshee
Or knit, as the case may be.

Well looky here. This seater fially looks like a sweater. Even though I posed it rather awkwardly on our couch. But anyway, I've attached the sleeves and started the cabled yoke...and I've actually completed a third of the yoke.

Right now, there are (deep breath) 440 stitches on the needles. Four rows at this level, then a couple of decreases to get it down to a normal level. But so far so good. The cables are very intuitive, which makes it easy to deal with the huge number of pattern repeats. 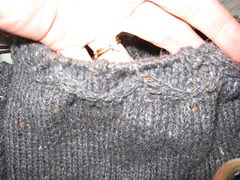 IMG_1070.JPG
Originally uploaded by kbshee
Here is a close up of the cables that I've done so far...the pattern makes sort of a loopy side scrolling cables that are very different and unique (or should I say Eunnyque, ha ha ha).

The yarn is Rowan Felted Tweed in a dark grey with white and brown flecks in it, very pretty. I like the yarn. If one drops a stitch, the stitch will unravel and then sort of stick to the other stitches surrounding it. Not that I've dropped a stitch (I've dropped, um, six or seven actually).

We had a nice visit with Tim's brother and sil, Kevin and Sue, from St. Louis. I mostly went out to eat with them as I had to focus on some work things while they were here.

Cody had his fourth chemo and he is losing a bit of his appetite. This is a concern but I think is the pattern wtih his chemo. He still has that optimistic smile on his face every day. What a dog!
on October 07, 2007

Love your TYC. I definitely want one too. The colour looks great. Looking forward to seeing the finished article.

That is going to be one gorgeous cardigan. I've been wanting to try the felted tweed. So pretty.
Sorry to hear Cody's appetite is down, but I agree that this is probably just part of the chemo cycle. He's in my thoughts. I'm hoping one day he and Wrigley can meet. :)

Wow, 440 stitches on the needles, that's certainly a challenge - but you're doing so well! That cardigan is going to look amazingly beautiful - can't wait to see more of it! Happy Knitting!

Nice Kim! It has a really comfy look to it.

Oooohh, that looks like a comfy one! And will go with everything!