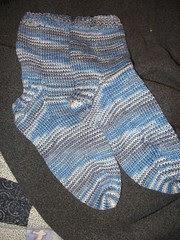 IMG_1328.JPG
Originally uploaded by kbshee
Look! Socks! Something I haven't finished a pair of in a long, long time.

This yarn was from the Yarn Pirate sock club, and it was a colorway called Icicle. It also has some tencel in it, and I've never knit with that blend, and it felt so silky, so I cast on pretty quickly after it came. I knit these up with the burned-into-my-brain sock pattern that is a basic cuff down flap heel pattern.

This yarn feels oh so good...almost like having silk socks on your feet. I like the neutralness of the colors...the blue isn't quite as 'neon' like in real life, and they just look like a beautiful, cold, clear winters day.

So today I cast on for gloves!! Gloves! I'm excited.I'm using STR in the mediumweight in one of the new Raven colorways..and while I only have the cuff done, I think I'm going to enjoy knitting gloves! Gloves!

My first class meeting is tomorrow...a graduate seminar on Web 2.0. Three hours! But it only meets ten times, so it should be interesting. I hope!
on January 10, 2008

Oh Kim, these are great! It does remind me of icicles, how cool! I'm wasn't trying to be silly there. Nice that you're knitting something you've been wanting to for ages, hope you enjoy!