And on to the sleeves... 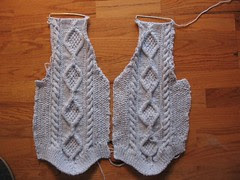 IMG_1428.JPG
Originally uploaded by kbshee
I am slowly on the mend from whatever infection laid me low for most of last week...minimal blogging, minimal knitting, minimal work, but lots of laying around in and out of the bathtub. Right now I'm tired, I'm coughing a bit, but I can knit and read and blog and be generally pleasant to the world at large.

The right side of the Diamond Aran went pretty fast...I think I knit much of it during the Super Bowl and then finished it last night when we were watching "Elizabeth: The Golden Age". Between this movie, The Tudors, and renting the PBS series "The Six Wives of Henry VIII" we are having a Tudor Winter. We also watched "A Man for All Seasons" last weekend. Ask us anything about 16th Century England...go ahead.

I like how this is lookign (which is good, since it is taking me pretty much forever to knit it). I also got the mirrored cables correct...which is something, since the instructions are pretty clear for one side, and to do the other side the pattern reads "reverse all shaping and patterns". So I sort of feel that I can conquer anything if I can conquer that!
on February 10, 2008

Indeed you can conquer anything. Hope you continue to feel better.

I watched Elizabeth, The Golden Age on Saturday. Still disappointed she didn't hook up with Walter.

Fabulous! And ceratinly glad to hear you're feeling better. We like you generally pleasant ;-) I share your love for period pieces very much. We happen to be into horro these days. Go figure.