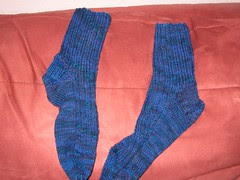 Next week is Week 10, also known as Dead Week around the U of O. The last week of the term...and it is anything but Dead. Not sure how it got that name, other than professors aren't to assign any project or administer a test that accounts for a significant part of the student's grade (and yes, there is a percentage number associated with that, which I have no idea what it is). Apparently there was a time when many professors gave finals during Week 10 just so they could start their vacations a little early by pretending finals week isn't there. And hence, Dead week.

In my small class, my students are presenting projects so I'm pretty much done there. Their final portfolios are due on Tuesday of dead week. I have two lectures left in my big class and then their final is Wednesday of finals week, and that's it!

Anyway. I have been knitting. It seems like I spent a long time knitting these Wollmeise socks but they're done. Wollmeise is wonderful! I haven't worked on the mitts for a while, but I did start another pair of socks (and they're adorable) and the Portland sweater from A Fine Fleece. Pics soon.
on May 31, 2008