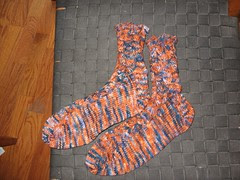 IMG_1627.JPG
Originally uploaded by kbshee
Well, I finally finished something...a pair of socks that has been in the works for a while. These are for Tim, and they're made with yarn from The Unique Sheep. Purchased from Woolgirl. The pattern was from "the little book of sock" and all in all I think they turned out fine. There's a bit of a slip stitched cable pattern in the sock which looks nice. Tim likes them..the yarn is a thicker weight than most sock yarns, which he loves.

I've been doing a round or two a day of fair isle...it is starting to look like something (but what, I'm not sure) but I do like fair isle. It isn't that scary, although it will be interesting once it is off the needles to see how it looks.

I also cast on a top from the Knitter's Book of Yarn, that was designed by Amie Gavin Glasgow, who is a visitor to this blog and one of those 'friends you've never met' in the knitting community. She created a pattern for a side to side sleeveless top in a striped pattern. Well, I ended up with some cotton yarn called Ty Dy which is pseudo self-striping so I'm making it with that. And it's a heavier yarn which has caused me to sort of rewrite the pattern to fit the yarn, but the basic concept is still there. It should look good. Pics soon.
on May 11, 2008