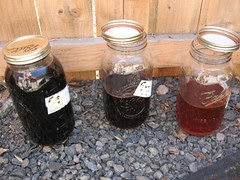 IMG_1819.JPG
Originally uploaded by kbshee
Ok. So I did the natural dye thing.

Quick backstory: three years ago I thought I'd try dyeing with natural dyestuffs (flowers, bark, bugs). I bought a kit from some yarnshop in Missouri (email or comment me if you want to know the name and I'll look it up) and undyed wool and fibers. Then, I broke my collarbone. Then, I went back to work. Then, a bunch more time passed. Then, it was yesterday.

I thought I'd finally give it a try. Honestly, though, it would be much easier if I just bought those full o'chemicals professional dyes and just squeezed 'em on the fiber. 'Cause natural dyeing? You have to do math and science and stuff and its not just a day fingerpainting. 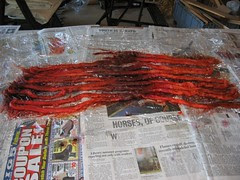 IMG_1820.JPG
Originally uploaded by kbshee
And I pretty much did it the easy way. I used three natural materials: cochineal (bugs), logwood, and brazilwood, and basically just had to dissolve the powdered dyestuff in boiling water and put it in a big jar. Then I had to mordant the fiber...more fibers won't just naturally soak up natural dyes, they have to have a little helper treatment, specifically in my case heating the fiber in a big pot of alum and baking soda. So all that happened in pre-dye day.

On dyeing day, I laid out the roving on top of a table covered in layers of newspaper and saranwrap. I then used turkey basters to trasfer the dye from the big jars to the fiber, then wrapped up the fiber and put it in a canning rack in the dye pot where an inch or so of water started to simmer. (I also did some sock blanks that aren't quite as colorful as the roving). 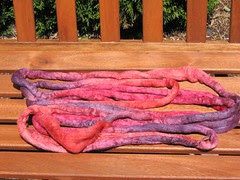 IMG_1826.JPG
Originally uploaded by kbshee
The packages of dyed fiber sit in the steam bath for a few hours, and then I let them cool off. Then the moment of truth...the rinse...which should be basically clear water, which tells you that all the dye has indeed been absorbed. Then the roving hang in a tree outside and dried, and finally today it was dry enough to take a picture.

Two reds and a purple. Not bad. Not as bright and vibrant as I would like but it is natural dyes and thus tend to be a bit subdued. But I learned a lot, I have more sock blanks and some undyed sock yarn, and I will live to dye another day.
on July 18, 2008

Ahh your title made me think of misspent youth enjoying listening to the Misfits and thinking I was such a punk goddess bad ass. Sigh.