The Slow Road to Portland 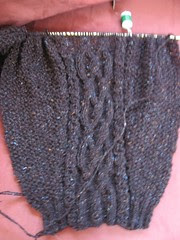 IMG_1788.JPG
Originally uploaded by kbshee
I've been working on the Portland sweater....

...for much of the summer (so far). It is going to be gorgeous when it is done. But right now I'm in the middle of the sleeve vortex and I'm wondering if I really will ever be done.

And of course I know I will, but sometimes, when it takes an hour to knit four rows on the sleeves....it doesn't seem like it.

I'm not one of those people who has a problem knitting wool stuff in the summer...actually I kind of like it, mostly because I know that they'll be done in time for sweater season. And I have enough yarn in the stash for several others sweaters from "A Fine Fleece", so I guess I'd like to finish it sooner rather than later.

The yarn: Rowan Felted Tweeed in Treacle, bought for the cheap from somebody on Ravelry.

In more news: guess what? Juneau is not only afraid of thunderstorms, she's also afraid of fireworks. I guess we should have figured that out. So we've had maybe two non-Juneau-in-bed nights this week. We're looking forward to the weekend being over and life getting back to normal, whatever that might mean.
on July 06, 2008

What a cool way to spend 4th of July! I would just love to chill out there . . . and I love the idea of llamas wandering about!
I tried the 'word cloud' and felt guilty about people whom I had left out!! Oh dear - will have to include them in future bloggings!
Best Wishes
Rosy in England
ps some time I must tell you what an absolute gas Boogs, Janey, Eric and I had on 4 July 1976!!