Who's Your Daddy...and Your Mummy? 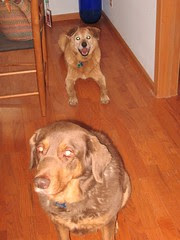 IMG_1809.JPG
Originally uploaded by kbshee
When you own a mixed breed dog, you get asked a lot what the dog is. Early on in Cody's life, Tim came up with the answer 'red' for Cody, and that seems to appease most people (some of whom probably think Red is a breed, like Rhedd or something like that). With Juneau, we tend to say 'part lab' since that seems fairly obvious.

Recently, a few different companies have cropped up offering to do a DNA test on your dog to figure out their breed history. We found a company called Biopet that seemed fairly reasonably priced (compared to the one touted at our Vet's, which is called Wisdom or something like that). So a couple of weeks ago, we swabbed both dog's cheeks and sent them off to Biopet. And today we got the results.

Cody, on the other hand, is much more complex. He's a pretty mixed-up mix of the following dogs:
Keeshond
Doberman
Dalmation
Dachshund (did Cody have extra 'd' in the dna?)
Pomeranian and
Shih Tzu.

We find the final four pretty hard to believe (and I find it all hard to believe, since I was predicting Rhodesian Ridgeback for years). We have found a few pics of Keeshonds with reddish brown fur (mostly they're black and grey) and can believe he's a bit of that, but we were surrpised there was no Golden or Lab or Sheltie in him. Oh well. Now we know (or do we?).
on July 14, 2008

That's pretty cool. From what I've read, once a dog is mixed with more than a couple breeds, the dominant characteristics often get lost. So, maybe Cody really is all of those things. ?

How fun! I pitched it but Van isn't interested. Be sure to talk it up when we see you in September.

I so want to do this with my Sophie. Thanks for posting about it. It is quite affordable and I really want to know.

What ever they are, they're adorable for sure!

Cody seems to be smiling at the camera. I do believe he thinks his heritage is very, very unique.