Yarn in the Trees 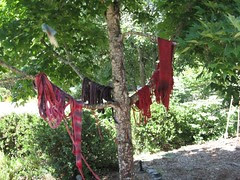 IMG_1831.JPG
Originally uploaded by kbshee
I did some more dyeing yesterday, and the maple in our front yard served as a drying stand for me. I did quite a bit yesterday, including 8 ounces of sock yarn, two fleeces, and two sock blanks.

You can see the stripey sock blank on the left hand side of the picture. The other one was a mess when I tried it the first time and so I just threw it in the cochineal pot at the end of the day. I don't think sock blanks are made for natural dyes, and I know they aren't made for my messy dyeing process!

Anyway, the colors yesterday were cochineal and logwood. 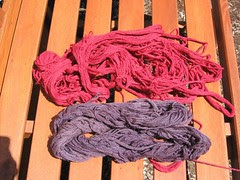 IMG_1832.JPG
Originally uploaded by kbshee
Two sock yarns (well, actually one sock yarn, a half pound of something wool from yarn2dye4). The top is dyed with cochineal, mordanted with alum and cream of tartar. The bottom one is logwood, with same mordant. The logwood was simmered for a bit and left to soak overnight; the cochineal simmered for about 45 minutes and it was done.

And yes, the top one looks like it became all deskeined (a new word? I think so!!) and should be a disaster to get into a ball. Luckily, I know someone who lives to detangle!
on July 23, 2008

Multi talented you are! They're gorgeous!