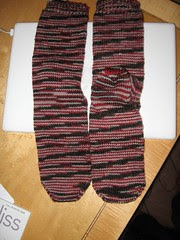 IMG_2209.JPG
Originally uploaded by kbshee
Somoko is one of those sock yarns that gets a lot of raves and can be impossible to find. It is made by the Fleece Artist people in Canada, and is a mix of merino, kid, nylon and silk.

And I call it Sokomo because it makes more sense (socks, SOKomo, see?)

Anyway, this yarn was a special colorway dyed for The Loopy Ewe in honor of (I think( their anniversary. I like The Loopy Ewe. The service is wonderful, the selection is great, and they have a nice frequent buyer program (I just earned a free skein of yarn...Dream In Color Sparkly, or some such, more on that later. It has flecks of silver in it).

Anyway...not that crazy about this yarn during the knitting up process, but the new sock owner (aka Tim) loves the final product...he says they feel terrific, so that's a good thing. The colorway is a nice masculine colorway, but bright enough to make it worthwhile during the knitting up. I won't race out to buy some more, but I wouldn't turn it down if it came a knockin' at my door.

We went out to visit Brownie yesterday at Silk Creek Alpacas. She's growing quite a bit, and is now flirting with the fellas. Another dark brown (aka bay black) alpaca has joined the herd, and it is fun to see imagine how Brownie might 'look' some day! Julie mentioned showing Brownie in the spring once the shows start, so I'm going to do a bit of research into that. At a minimum, I'll go in on a booth with Bil and Julia at the Eugene alpaca show in June, which I'm very excited about! Bil and Julia also gave me a beautiful gift of some alpaca roving...8 oz of brown and 8 oz of white that I can dye...very excited about that too. Must. Get. Spinning.

The lovely day yesterday was complimented by an AWESOME win by the UO Ducks over their arch rivals, the Oregon State Beavers, in a nail-biter game where the Ducks had a comfortable lead most of the time but it was a nail biter anyway.

One last day of peace before the last week of classes (aargh) and finals week (yeee) and then grading and then a little break!
on November 30, 2008

Yes! What Jeanne said :-) Nothing like a great game to keep it exciting...Winter break time!