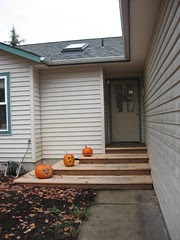 IMG_2169.JPG
Originally uploaded by kbshee
For the past several Halloweens, the spookiest thing about our house has been that our front yard has looked like the site of a nuclear bomb. A few years ago, we were so overrun with morning glories (a pretty flower in some places, a noxious weed in Oregon) that we covered the 'lawn' (and we use that term very loosely) with black fabric and mulch, and just let it die out to try to kill all the weeds off. Two summers ago we put in the center garden in the middle of the lawn, and then this summer Tim did two great projects: front 'deck' and the arbor.

For the front deck, he took out our front steps and put in three larger steps that make a much more open entrance to the house. Our front door has been referred to a 'bat cave' so opening it up makes it just a little nicer. 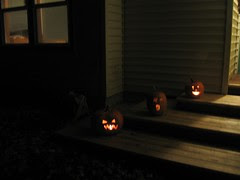 IMG_2177.JPG
Originally uploaded by kbshee
And a bonus, that we didn't realize until this week, is that it makes a much nicer display for the pumpkins. We went out to the pumpkin farm a few weeks ago and brought back some big pumpkins. Often we find ourselves too busy (or lazy) to carve them, but on Wednesday night we dug in and did the jack-o-lantern thing. Each one took two or three tea lights because they were pretty big. They made quite the show out in the front! We went through a lot of candles last night because Steve and Jen brought E squared by for Trick or Treats. Evan was dressed as a ghost (so cute) and Erin had a Candy Corn bedecked outfit. So they came by around 5, and then we had a few other groups til about 7:15. 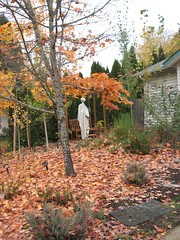 IMG_2168.JPG
Originally uploaded by kbshee
Of course I overbought in the candy area, so i gave the FedEx guy a handful of candy this morning.

We also put in an arbor at one end of the yarn and bought a glider to put under it. Yesterday afternoon, about half an hour before the kids were due to come over, we hung a ghost up in the arbor. It was not very scary in the day light and pretty much impossible to see at niht, but we did give it a shot.

And yes, it looks like we need to rake some leaves.

your pumpkins look fantastic!
we are not generally as good at 'doing hallowe'en' on this side of the pond
stella and family and i had a good night but in some quarters behaviour can be very unpleasant.
we are getting better at it though!
rosy