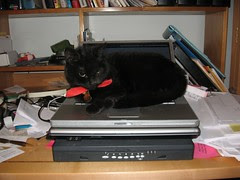 More Cats with Bows
Originally uploaded by kbshee
You've met Stella...our poor little brain damaged orphaned kitty that doesn't make the blog that often because it is just too dang hard to take pictures of black cats! And we won't use the flash with her because she has seizures and we're afraid the flash could set it off.

But this picture, of her napping on one of Tim's computers, is great...it shows her little face, as well as her lovely Christmas bow.

We had a nice, quiet Christmas...gifts in the morning, munchies with Steve, Jen and the bambinos, and then home for the playing of games, the eating of leftovers and the telephoning with relatives. My poor brother in Flagstaff apparently spent most of Christmas shoveling some of the many inches of snow they have on the ground there.

I finished the second sleeve for the Cable jacket...but it looks nothing like the first sleeve. i can't figure out what exactly I did wrong, but I ended up un-binding-off the first sleeve and frogging some of it and then reknitting, but it still doesn't match. Please pray to the Blocking Goddess that all will be well in the end.

Today we're installing new shelves in our closet...hopefully we'll just about double our storage space. And the 'we' is pretty literal...Tim is doing most of the work while I hang on the bed and knit, surf, and occasionally pass things to him.
on December 27, 2008

Stella is a cutie! I hope that the Cable jacket issue works out.

Happy holidays to you all!

She has such a sweet little face, too.

I hope you had a very wonderful Holiday. :) Happy New Year Kim