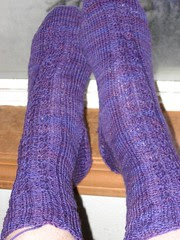 IMG_2286.JPG
Originally uploaded by kbshee
We've had snow, ice and cold cold cold temps, so you would think that I'd have a bunch of knitting to show you. Alas, not so much. Tim and I are both on break, and time feels very very elastic. Plus the weather...it sort of sucks up time when it takes 2 hours to run 45 minutes worth of errands, when you factor in puppy romping time, etc. So anyway, I do have some knitting to show you and am getting geared up to tackle a new project (if I can only decide what said project would be...probably a cable sweater).

These are the DIC smooshy socks in visual purple and can I tell you, if you mixed Wollmeise's colors with the DIC smooshy base I would buy that yarn and only that yarn for the rest of my natural life. Seriously. This yarn is great...I've said it before, if you haven't tried it yet take some of that gelt that Santa brings you and get you some. It's great. 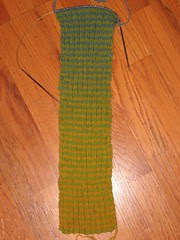 IMG_2285.JPG
Originally uploaded by kbshee
I've also been working on this scarf...the IT scarf of the 2008-09 winter season. You've probably seen in knit up in Noro something or other...it is a simple rib scarf where two different yarns alternate every two rows. The magic comes when you pick yarns with interesting color changes. I didn't use Noro, instead I used Kauni that was in my stash (I love kauni, I really do) and so far it looks like this. It is fun to knit just to watch it change colors before your eyes.

Unfortunately, I have some problematic Kauni, where knots were used to create the balls and the joins are not in the proper colors. In one ball that I used for my clapotis last year, one color was just skipped. In this ball, it goes from yellow to green to blue to purple and then back to blue (it is supposed to go to red). I can tell this by peering in the ball. I'd send it back (I did send an email to the yarn shop when I found the first know last year, and they said "oh well". So I won't buy Kauni from them again. In general I like the store but not in this case. Little KNits sells it. Buy it from them!). Anyway, I think it will all work out OK since I think the scarf will be done at the purple, but really. That's just obnoxious.

Today: more gazing out the windows at the weather, writing of cards, finishing of gifts, and who knows what else?
on December 17, 2008

Smooshy is fun, isn't it!
It feels so springy in your hands. I made a small shawl with it. I also love the DIC color variation. It is very subtle. I used a color called Lunar Zazzle and it really makes me think of what the sky looks like when there are light clouds around the moon.

Kim -- I'm the publisher of Kluge's Final Exam. Give us your response to it when you get there... JK