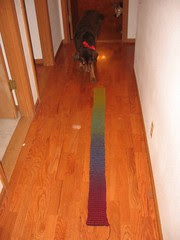 IMG_2296.JPG
Originally uploaded by kbshee
I've basically just been working on this scarf for the past few days...and I haven't had as much time as I thought I would to work on it, just because we're busy doing Christmas-y stuff and just enjoying the season. We got the first season of "The Man from Uncle" on DVD from Netflix...it first aired in 1964 and honestly, I don't think we were allowed to watch it. We weren't really a spy-tv watching family. Anyway...it is very fun, in that 60s risque way that is so cute to see. Anyway, I digress. On to the scarf!

I did declare the scarf finished last night, so here it is!

Basically, I had balls of kauni, and the scarf pattern is knit two rows in one color, two rows in the second (k2 p2 and end with a k2). I started the scarf with two 'adjacent' colors...yellow on one ball and green on the other...and so came up with a pretty cool looking rainbow scarf (from afar). I'll probably do another starting with the two yarns at opposite ends of the spectrum...like start with blue and orange...just to see what that might look like. 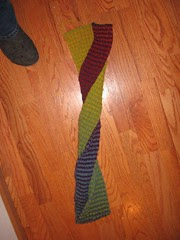 IMG_2298.JPG
Originally uploaded by kbshee
Here is a close up of the scarf (twisted around itself) and my foot. You can see the stripes a bit better in this picture...it looks pretty cool close up too, of I do say so myself.

This is a pattern that has been making the rounds online, and the original was knit with Noro something or other that also results in beautiful color changes. I'm partial to the clear true colors of Kauni myself.

Some day I may even try one of those fancy Kauni sweaters...although they do involve steeking, which of course is the one knitting thing I'm scared of. Maybe I'll make that my 2009 knitting resolution: to steek!
I'm debating between three sweaters for my next project: a cable aran sweater from Paton's "Street Smart" book, a Debbie Bliss sweater that was featured in the VK Anniversary issue, and a cable pullover from Elsebeth Lavold's "Viking Patterns for Knitting". I have yarn for each of them, so it is just a matter of finding the one that gets me going first. The Debbie Bliss keeps floating to the top. Stay tuned!
on December 22, 2008