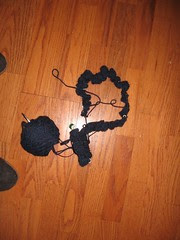 IMG_2386.JPG
Originally uploaded by kbshee
Ah, the joys of a peplum.

I did some measuring and realized I didn't have to do the 470 or whatever stitch cast on...I could reduce that number by 48. So I cast on 422 or something like that. There are 15 repeats of 26 stitches (two different charts, one 14 stitches and one 12 stiches), plus two ten stitch patterns on either end and one additional 14 stitch hunk to balance out the 26 stitch thing.

So, after six hours of work, I finished five rows. Yee!

Luckily, the whole peplum is only about 54 rows, so I'm about 1/9 finished (i did the cast on and two rows on Saturday). The pattern isn't hard, it is just long. The wrong sides are just knit the knits and purl the purls, and in every other RS row there is only one or two cables in the 26 stitch hunks (on some RS rows, though, there are four crosses...yee...and I'm definitely cabling without a cable needle, using my own patented 'pinch and pray' method). 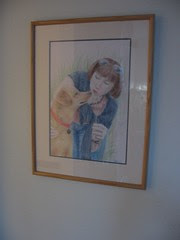 IMG_2390.JPG
Originally uploaded by kbshee
Since I don't have a lot of yarn eye candy to show you, maybe you'd like to see one of my Christmas gifts from Tim that we finally have had framed and hung on our wall. It is a lovely colored pencil work of Cody and I. When we first moved here...probably 11 years ago...we took a short hike up "Moon Mountain" which is the hill behind our house. It was covered with wild flowers (so it must have been springtime) and I stopped and blew a dandelion head off with Cody. Tim took a picture that has always been one of our favorites. Tim had an artist in one of his classes and asked her to reproduce the photograph for us, which she did just beautifully. After Christmas we took it to the framer's and had it matted and did some restoration work on it.

We just love it. It does capture Cody and even me in my younger, bang-ed days. I'll treasure it forever.
on January 19, 2009

Wow --- what a beautiful gift. And I can only imagine the moment between you and your dog.