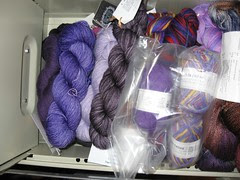 IMG_2670.JPG
Originally uploaded by kbshee
So last night, Tim had an awesome idea.

But for whatever reason, last night Tim said "Why don't you use that for yarn?"

Now, dear readers, yarn storage at our house is, um, interesting. It started off quite well with two hanging baskets in the guest room closet. Then expanded to four or five (or ten) plastic bins. Then to various bags scattered around the house. Recently, 'storage' has been 'throw it on the guest bed and take care of it later.'

So: I have four drawers: one for purples, one for blues, one for reds, one for multicolors. The rare oranges go in the red drawer and the greens go in the blue drawer. No yellow to speak of. Here is a shot of the purple drawer (some things are in plastic). 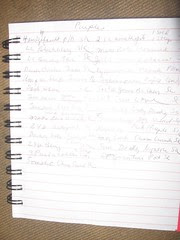 IMG_2672.JPG
Originally uploaded by kbshee
This is great in so many ways. It really gets me organized, as opposed to 'find places to put the yarn so we look like we live a sort of normal life." Even better, when I get a hankering for, say, red-pink-gold yarn, instead of going online to see where I can buy some, I can open the red drawer and see that oh, I have one two THREE skeins in that colorway!

And to make myself even more organized, I've been writing down an inventory in a little notebook, and starring the yarns that I think I might want to work with in the near future. The little book was part of a Woolgirl sock package, is a great size and come with a little pen that fits in to the book. And of course..

First thing this morning, i lost the little pen.

I love the idea of re-using a file cabinet. Have you tried Ravelry for inventory?

Good idea from Tim! At one point I did the whole inventory of yarn thing thinking I would put it on Ravelry. Took pictures of each yarn, wrote it down with name, weight, and number of skeins. Let's just say I hope you did better than me in actually using that list!