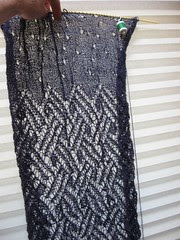 IMG_2710.JPG
Originally uploaded by kbshee
So on and on with the Hanami stole. I think I've finished 90 out of 200 or so of the 'second half' which is, obviously, a lot simpler than the first half. Where the first half was acomplex basetweave pattern, the second half is basically making a bunch of little holes in the stole.

I can do that.

I've been keeping up with a minimum of four rows every day, most days I do about 10 rows on this. So I think I will be finished in a few weeks, which is nice. I can feel that the end is, well, if not near, then relatively close.

The yarn is more purple than blue, which doesn't quite show up here.