Has it been a week? 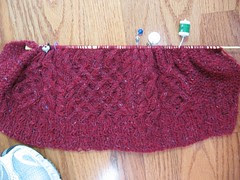 IMG_2819.JPG
Originally uploaded by kbshee
Thank you so much for your positive thoughts and comments about our Cody dog. It was an odd but good week last week...we took him to the vet first thing Monday, and our vet wanted to try one last thing...an anti-nausea drug that is used on human chemo patients. It had an astonishing effect, making him seem much happier and less in distress, and bringing back some of his appetite. Once he kept food down, we added back an antibiotic to try to control his diarrhea, and that kicked in on Thursday. He's also getting a low dose of steroids to help with his inflammation.

The upside is: he's put on some weight, he has a bit of his old personality back (ok, sometimes a lot of it!) and he has a good appetite for a few hours every afternoon. The downside of course is that any drugs are not good for his liver, which is where his cancer is growing. But we have our dog back, and we'll be able to take him on one last trip to the coast.

As I write this, I know to some it may sound selfish, but we spent much of last week ready to call it quits at any sign that he was sliding again. And he didn't slide...he has little rallies every day. So I don't think he's quite ready to go, and so...to the coast!

We're staying in Pacific City, where we own a little piece of land, and we're renting a house one row back from the beachfront houses...we've stayed in the house before so we know we'll be comfortable. The steps are steep, so we bought one of those lifter things for Cody...it's a piece of canvas with handles that you put under the dog so you can support/life him while he's walking up steps or getting into the car. A little easier than lifting him up and carrying him up steep steps a few times a day! 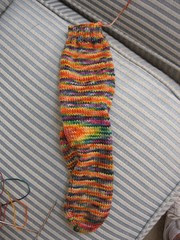 IMG_2817.JPG
Originally uploaded by kbshee
And there has been knitting. I've started "St. Patrick" from "A Fine Fleece" using Felted Tweed in this great red color. The cables in this sweater are so pretty! I've also been doing a mindless sock in the rainbow colorway from Woolgirl. I'm working on the second Cookie A sock and there's a third pair in the basket that I've lost interest on. The big question is of course how much to take to the beach...all three projects, of course, and I have three other skeins of sock yarn wound into balls...just in case. Ha!
on September 07, 2009

Nice way to begin the day --- the news about Cody.

I am pleased to hear that your family...all....got to have a lovely weekend at the coast! You are great parents!
Your new sock is quite colorful!

So glad to hear Cody was rallying again and in better spirits. I hope your trip to the coast was a good one for everybody!

The start of St Patrick is looking great...those cables are stunning!

Does school start for you soon?